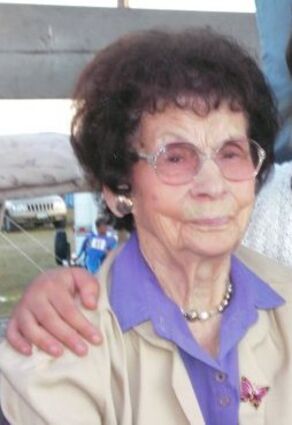 Mae Audrey Branchaud Cobenais, 100, of Red Lake, MN passed away Monday Nov 26, 2012 at Red Lake I.H.S. hospital after a lengthy battle with cancer. An all night wake will be held at the Red Lake Center Thursday November 29, 2012 starting at 4 p.m. Funeral services will be held at St.Mary’s Catholic Church, in Red Lake MN on Friday November 30, 2012 at 1 p.m. Burial will follow at St. Mary’s Catholic Cemetery with Father Jerry Rogers officiating. Soloist will be Joe Vene. A Feast in her honor following her burial will be held at the Red Lake Center. She will be buried next to her husband, Steven Cobenais, who passed away in 1991.

Mae Audrey was an enrolled member of the White Earth Nation and grew up in Waubun MN, the daughter of Irving and Julia Vanoss Branchaud. She is survived by daughters, Joyce Roy, and Stephanie Cobenais, son, Doak (Linda Blue) Cobenais, step-daughter Agnes King. And also 17 grandchildren, 39 great grandchildren and 40 great great grandchildren. Mae Audrey was very active during her early years working daily with her family on their farm. She attended Flandreau Indian Boarding School. She was the second eldest of twelve children. Mae and her family moved to Red Lake in 1931, where she and her family worked for Marie Fairbanks at the Fairbanks Store, down the hill in Red Lake. Mae Audrey met her husband Steve and married him on 10/19/1933. They resided first in Big Stone, where they lived in Steve’s parents Tom & Katherine Naymaypoke “O gah bay ausheke” Cobenais home. In 1942 they moved their house from Big Stone to its current location east of Red Lake. Mae Audrey was a very proud homemaker, she prided herself with raising her family and supporting them any way she could. Mae Audrey always had Sunday Dinner at noon, and was a devoted member of St. Mary’s Church. Following her children’s growing up Mae Audrey and Steve traveled to numerous Pow-wows throughout the United States and Canada.

Mae Audrey was always a great hostess to anyone that came to visit her, she was a great historian. Mae Audrey was a devoted bingo player, Steve would drive her to area bingos and wait for her while she played. When Steve couldn’t drive anymore she’d walk to and from Bingo at the Red Lake Center, using her flashlight to guide her home. Mae Audrey, in addition, was a GREAT dancer and she enjoyed going to area establishments with family and friends. She also finished many crossword puzzles, especially Prizeword Pete. Mae Audrey’s key to her longevity was her spirituality, exercise, family, pencil drawings and eating well. She loved sunrises, sunsets, how nature changed with the seasons. Mae Audrey in addition was an avid collector of recipes, postcards, stamps, jewelry, newspaper articles etc. Mae Audrey was very old fashioned, and had no desire to change to modern technologies; she continued to cook everything from scratch.