Researchers Challenge ‘Idea of Intelligence’ in the Classroom 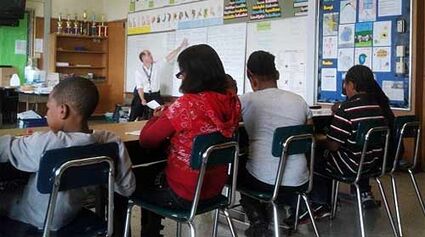 For low-income and minority middle school students across America the message is, all too often, “you can’t.” It’s reinforced in the classroom, in the media, among peers, and it’s also the message from education statistics: high school dropout rates are uneven by district, college grades remain stubbornly unequal.

But researchers from Stanford are aiming to turn that message on its head by borrowing from an oft-heard expression: when you think you can, you can.

In pairs of short, 25-minute sessions, or “interventions,” participating students learn that their brain is “like a muscle” -- it can get stronger the harder it trains. They begin with a quick survey, move on to an activity, and end with a writing exercise. In that process students hear stories from upperclassmen that started out with lower grades and fewer friends, only to turn things around. Or they write about their own personal values -- what they take pride in, inside and out of school. In each case, students finish with the same task: write a summary for a fellow peer.

Teachers, meanwhile, are told to present this as a routine exercise, as opposed to an actual intervention. Studies show students respond more positively when they believe they are helping other students instead of being helped themselves.

“[Our research] shows how much ability and potential is lying there latent in the kid that’s not being tapped,” says Geoffrey Cohen, who along with Carol Dweck and Greg Walton forms part of the team behind Stanford’s Project for Education Research That Scales, or PERTS. “All of these interventions show how resilient and how much the children have learned in spite of the adversity they face,” Cohen adds.

Indeed, changing poor-performing students’ ideas and feelings about intelligence and belonging, they say, can have a dramatic impact on performance, both in and out of school. PERTS researchers say their interventions can help reduce the achievement gap for poor and minority middle school students by up to 30 percent, and cut college GPA disparities in half over two to three years.

The team is now looking to expand their research by bringing these interventions to middle school, high school, and community college classrooms nationwide. Last school year, PERTS reached 5000 students; this year, 3,500 plus and counting; in future years it hopes to expand those numbers to hundreds of thousands.

To do that, PERTS set up online. Web-based, the program is a largely automated system, letting teachers run the interventions in class themselves without researchers on-site. Middle school through college classes enroll on PERTS’s website, where teachers download instructions and activities. PERTS researchers and staff provide teachers support, and results, by phone as needed.

Jan Kaay is superintendent of Luther Burbank School District, located in San Jose. The district was one of the first to incorporate PERTS interventions in its middle schools, where nearly 100 percent of students qualify for free or reduced meals. Kaay, who says she’s seen some improvement in grades, explains that one of her hopes for the program is to help students with their “emotional growth.”

Which speaks to the program’s approach, says Walton, who teaches psychology at Stanford.

He stresses that each intervention aims to address the psychological needs of an individual students’ classroom experience, whether it’s teaching them they can up their smarts or helping them dismiss concerns over ethnic or gender stereotypes. “If the kids’ ears aren’t open to the lesson they’re receiving, it doesn’t matter how good the lesson plan is,” he adds.

Similar ideas have come and gone since the 1970s, but it’s only in more recent years that they have begun to make their way out of smaller study settings and into classrooms at large.

Former Department of Public Welfare Secretary and early education policy expert Harriet Dichter says one reason for that has to do with Americans’ tendency to look for what she calls “silver bullets”: simple, often singular solutions to complex problems (standardized testing, anyone?). Such attitudes make advocating for a piece of a bigger puzzle difficult. “We often see people ‘pitting’ solutions against one another,” Dichter notes.

Still, both Cohen and Walton acknowledge their interventions are not cure-alls, but more like “the third leg,” alongside curriculum and teaching, “upon which education rests.”

Cohen, who says expansion -- from controlled experiments to larger, school district settings -- has been the major obstacle to implementing earlier educational interventions, says PERTS is reinforcing strategies that have already proven effective. “I think what we’re doing is bottling what exceptional teachers already know.”

But how can such a brief intervention have such a lasting impact years later?

“It’s not really a brief intervention,” insists Cohen. “From the kid’s perspective it’s a big impactful experience to be assured that intelligence is malleable … It’s a powerful message. It’s brief but it’s continually relived, that message.”