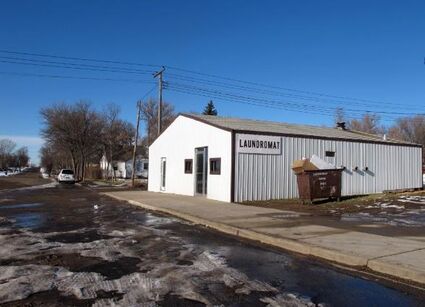 This laundromat located in Pashall, N.D, is near the location where a New Town, N.D., man killed himself with a knife Sunday, Nov. 18, 2012. The man is considered a person of interest in the Sunday shooting death of a woman and three of her granchildren in New Town, N.D., on an American Indian reservation called Fort Berthold.

NEW TOWN, N.D. - A grief counselor who provided support to a Minnesota reservation following a deadly shooting spree and victims of the Oklahoma City bombing is in New Town to help the community deal with the death of four residents.

Jacqueline Gray has been on hand since Wednesday, offering grief support following the deaths of Martha Johnson, 64, and three of her grandchildren — Benjamin Schuster, 13, Julia Schuster, 10, and Luke Schuster, 6 — on the Fort Berthold Indian Reservation, the Minot Daily News reported in a story published Saturday ( http://bit.ly/QiUAh0).

Police described Kalcie Eagle, 21, who killed himself the same day as the shootings, as a person of interest. Eagle lived a block from Martha Johnson.

Gray is associate director of indigenous programs at the Center for Rural Health and the Department of Pathology at the University of North Dakota School of Medicine and Health Sciences. She previously offered grief counseling at Minnesota's Red Lake Reservation after 10 people were killed in 2005, and after the 1995 Oklahoma City bombing, which killed 168 people.

"I think parents are concerned about their kids dealing with a classmate who has died, and also worried about dangers that might remain," she said.

The FBI, which has is handling the investigation because it happened on a reservation, has said community members are no longer in danger.

The Fort Berthold Reservation is home to the Mandan, Hidatsa and Arikara, who are known as the Three Affiliated Tribes.