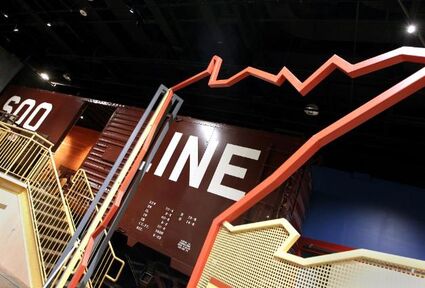 A Soo Line boxcar takes visitors on trip through time in "Then Now Wow," a Minnesota history exhibit, at the Minnesota History Center.

Breaking sod on the prairie would have been a whole lot easier with a pair of computer- balanced oxen hitched to the plow.

That's what kids will encounter in the Minnesota History Center's new "Then Now Wow" exhibit, where they can lean into the ox yoke and heave-ho themselves. Walking on treadmills submerged in a little hill, kids can pretend to be a farmer guiding a plow or the "oxen" pulling it. If one is extra strong and starts to pull ahead, the hidden computer will balance the effort required to pull the plow so that the weaker "ox" can keep pace.

Nearly three years in the making, the $2.5 million show deftly mixes past and present, low and high technology, "then" and "now" as the title puts it. The largest and most complicated exhibit the History Center has ever produced, "Wow" is an interactive experience that includes a sod house, a tepee, a streetcar, an iron mine, a grain elevator and a boxcar that kids can enter, each filled with levers, tools and gadgets to manipulate for more information. And for fun.

"It had to be experiential," said exhibition designer Ellen Miller. "Kids don't want to read about a sod house; they have to be able to go into it. They don't want to read a rail of text; they want to go into a streetcar, open the windows and find something. These are not cheap tricks, they're just ways to address a different audience."

Installed in a sprawling auditorium with multiple entries, the show is loosely arranged according to Minnesota's geography, with the iron mine, fur trade and forest-products section in the "north," and the sod house, buffalo and grain elevator in the "south."

In the middle, roughly where the Twin Cities would be on a map, are the streetcar and the tepee. Obviously, the tepee could have been anywhere since the entire state was once Indian land, but it serves as a dramatic centerpiece that's likely to be a kid magnet. Inside is a faux campfire in the "smoke" of which hovers a video of Dakota artist/performer Bobby Wilson, who explains a bit about his people's history and language. He also painted the swirling blue design on the tepee's exterior in a style that looks more like tagging than a traditional motif.

"The idea is to get families with kids engaged with the past," said Dan Spock, director of the History Center. "There's a stereotype that kids aren't interested in history, but we know they're very interested in anything before they were born."

The trick is figuring out how to engage that interest while also satisfying the center's educational goals. Most Minnesota history is taught in sixth grade, so exhibits are geared to 12-year-olds, with plenty of enrichment for younger and older students. Broad themes tie in with "Northern Lights," a widely used Minnesota history textbook developed by the Historical Society. New material will be added periodically during the show's 10-year run, including a section on St. Paul's mostly African-American Rondo neighborhood that will appear next summer.

Exhibit concepts were tested on target audiences before the museum had them built. The sod house went through several versions. There was a comic-book tale about life in a dirt-walled home. Kids didn't get it. Staff members introduced pioneer troubles -- blizzards, a plague of grasshoppers -- in a multimedia presentation in the house. Didn't work.

"I'd scorched the earth looking for good blizzard stories" in pioneer diaries and papers, said curator Miller. "But kids were totally oblivious to the blizzard and didn't understand the grasshoppers, so we had to change the interpretive strategy."

What worked was encouraging kids to find things out on their own. Signs in the 12-by-12-foot faux sod house pose questions whose answers are hidden in the room. Why is the light flickering? Sod huts didn't have electricity, just kerosene lamps. Where did pioneers go to the bathroom? In the chamber pot housed under the bed. Yuck.

Cartoons enliven some "lessons," most notably a delightful beaver whose compatriots got turned into hats during the early fur trading era. In the mine, young engineers can place "dynamite," run huge drills and peer into a deep shaft to see donkeys pulling ore carts hundreds of feet below. Historic photos and other documents explain mining, paper mills and logging.

Something for every visitor

A poignant mural-sized photo from the early 1900s introduces Indian children whom the U.S. government took from their families, gave new names and shipped off to boarding schools to learn white ways and forget native culture. Video interviews with boarding-school survivors add to that bitter tale, while lively interviews made this past spring of kids at Red Lake Middle School show how much Indian life has changed.

Contemporary immigrant groups are well represented, too, including displays of cardboard boxes in which Hmong refugees carried their possessions from Laotian camps, and interviews with young Somalis living on Minneapolis West Bank.

And then there's a door from the school bus that survived the collapse of the I-35W bridge over the Mississippi five years ago. Together with interviews of survivors, such artifacts reinforce the notion that history isn't just dead facts buried in a musty book; it's a record of living experience in which everyone plays a part.

"We have a much more diverse audience now than ever before, so we want to make sure that all the kids who come here feel included," said director Spock.