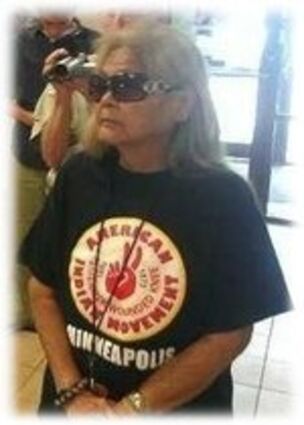 Mary was a co-founder of the American Indian Movement of which she was dedicated to until her passing. MJ took part in the very first "Longest Walk" on Feb 11, 1978. She was also a powerful voice at the Alcatraz occupation in 1968. MJ worked at the Minneapolis American Indian Center for the Indian Child Welfare Act program. She was also a longtime employee of the Legal Rights Center, continuing to be a powerful voice for Native People. MJ spent her life in the traditional ways, being a member of the Mide' Lodge, Sundances and Sweat Lodge's. She was an international teacher of those ceremonies that she was so committed to, traveling from New Zealand to Russia. MJ's humor was a joy to all who either shared a cup of coffee or just sat in silence to listen to her teachings. She will be missed by all who knew and loved her.

Those left behind to cherish her memory are her sisters; Beverly, Starr, Shirley, Stiyer and Darlene, her brothers; Donald and Kenny, grandchildren; David, Michael and Deanna Wilson, Rebecca Cacas, David Jr., Suzy and Gordy Thunder, many great-grandchildren, numerous nieces, nephews other relatives and many, many friends.

MJ was preceded in death by her parents Edward and Irene, her son David Wilson, her brother Bennie Bellanger and a nephew Andre Bellanger.

A wake for Mary will begin Friday, November 16, 2012 at 5:00 p.m. at the Minneapolis Indian Center in Minneapolis. She will then journey "home" to Cass Lake on Saturday to continue her wake until her traditional funeral service on Sunday, November 18, 2012 at 10:00 a.m. all being held at the Veterans Memorial Building in Cass Lake, MN. Casketbearers for MJ will be Vaughn Bull Lodge, Clyde Reyes, Ken Bellanger, Eric Little Crow, Kevin Bullen and Brent Reyes. Her honorary casketbearers are the American Indian Movement and all her family and friends. Interment will be in Prince of Peace Cemetery at Cass Lake, MN immediately following the service.

Arrangements entrusted to Northern Peace Funeral Home of Walker. On-line condolences may be given for the family at http://www.northernpeace.com