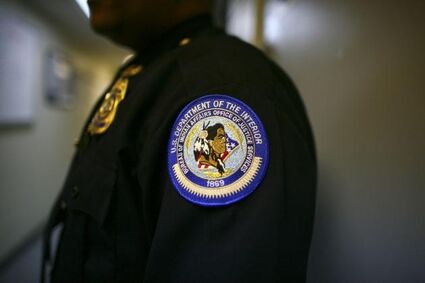 The federal government allocates far less money for public safety on Indian lands than what big cities devote to it.

The federal government has cut the size of its police force in Indian country, reduced funding for law enforcement and begun fewer investigations of violent felony crime even as rates of murder and rape there have increased to more than 20 times the national average, according to data.

The data, much of it contained in recently released Justice Department reports, underscores a reputation for chronic lawlessness on Indian reservations, where unchecked crime has for years perplexed federal agencies, which are largely responsible for public safety on Indian lands.

As one illustration of the profound increase in violence in recent years -- despite generally declining crime in much of the rest of the nation -- FBI data reports that the number of reported rapes on the Navajo reservation in the Southwest in the past several years has eclipsed those in nine of America's 20 largest cities even though there are only 180,000 people on the reservation.

Navajo's 374 reported rapes in 2009, for example, outpaced even Detroit, for decades among the nation's most violent cities, where there were 335 rapes that year.

President Obama has called violence on Indian lands "an affront to our shared humanity." But according to federal figures, his administration has cut both the Indian Affairs budget and spending on reservation law enforcement. Meanwhile, the Justice Department has opened fewer investigations for violent felonies committed in Indian country than under previous presidents, while pursuing violent crime in the rest of the nation far more aggressively.

From 2000 to 2010, for instance, as crime on some reservations surged by as much as 50 percent, the number of suspects on Indian lands being investigated for violent crime by U.S. attorneys declined 3 percent, according to Justice Department figures.

The Justice Department has deployed 37 extra FBI agents and U.S. attorneys to Indian country in recent years. "The attorney general has said this is a priority, and I know he is absolutely committed to the issue," said Brendan Johnson, the U.S. attorney for South Dakota.

Nonetheless, the federal government allocates far less money for public safety on Indian lands than what similarly sized big cities devote to fighting crime. The federal Bureau of Indian Affairs, for instance, which along with the Justice Department is responsible for law enforcement for 1.6 million residents spread out over 56 million acres of Indian country, distributed $322 million to tribal law enforcement programs in 2012, according to budget outlays.

But both Philadelphia, which has a population of 1.5 million and a police budget of $552 million, and Phoenix, with 1.4 million people and a $540 million police budget, spend far more on public safety despite having smaller populations and less area to patrol. (Phoenix employs 3,100 officers, while Philadelphia has about 6,400 officers).

"We pick up a guy for some alcohol-related offense and are out of town for an hour taking them to jail, and in the meantime people are here clubbing and stabbing each other," said Milton Bianis, a tribal officer.

FBI agents have told officers on Pine Ridge that the reservation needs at least 140 officers to handle an epidemic of violence that includes 3,000 child abuse cases and more than 20,000 arrests each year -- nearly one arrest for every other resident.

Michelle Tran, a spokeswoman for the U.S. Attorney's Office in the District of Minnesota, said in a statement:

"Through its partnerships with federal, state and tribal law enforcement and prosecutors, the USAO will continue to vigorously prosecute violent crime in Indian country."

In addition, B. Todd Jones, the U.S. attorney in Minnesota, said in an interview in July: "If you look at the last couple of years, we've done a lot of work in Indian country. The FBI has enhanced their presence up there with some additional resources. The Safe Trails Task Force is up there out of Bemidji. And so I think the department nationally has really stepped up the level of engagement in Indian country work. Not only here in Minnesota, but my colleagues over in North and South Dakota are kind of on the cutting edge."