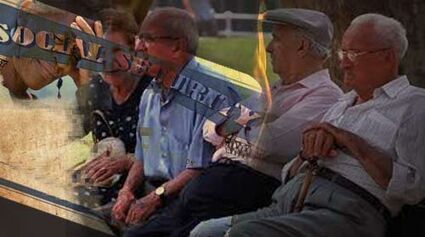 Editor’s Note: Advocates worry that the post-election drive for a grand budget bargain will cut retirement programs for ethnic seniors needing them the most.

SAN FRANCISCO—Since last week’s win by President Barack Obama, the issues of aging and retirement have loomed just beneath the headlines.

Women, youth and a record Latino vote were credited with the president’s victory in key swing states. But it’s Americans over the age of 50, especially those from immigrant and minority communities, who could have the most to gain -- and lose.

That’s because as the budget crisis looms, these seniors could be the first and hardest hit.

Two days after the election, the top story on the New York Times read, “Back to Work: Obama Greeted by Looming Fiscal Crisis.”

The so-called “fiscal cliff”—more accurately a slower fiscal slope--that the White House and Congress are now racing toward is the combination of across-the-board federal budget cuts and tax increases—over $600 billion worth—that will kick in on Jan. 2.

The meat-axe of automatic government cuts (officially called sequestration) that will swing—unless the President and Congress can hone a more surgical approach to needed budget cuts and tax increases -- would whack at everything from military spending to meals on wheels for homebound seniors. (The automatic cuts, though, would not touch Social Security or most of Medicare.)

Advocates for elders, though, worry that political agendas in Washington will cut a fiscal “Grand Bargain” that might trade off modest revenue increases with cuts to Social Security, Medicare and Medicaid benefits that vulnerable Americans need to get by in hard times.

Immediately following the election, House Speaker John Boehner, R-Ohio, signaled that any deal generating new government revenue –- not, mind you, “new taxes” but maybe some closed tax loopholes –- must include reforms to entitlement programs. Despite Obama’s win and Democratic gains in the Senate, Boehner is overseeing a House that remains under Republican control, with a strong Tea Party-supported contingent.

Meanwhile, Senate Majority Leader Harry Reid, D-Nev., stated the day after the election, "We are not going to mess with Social Security," in cutting a bipartisan deficit-reduction deal. Other prominent Democrats, though, reiterated recommendations to place everything on the negotiating table, including entitlements.

Larry Polivka, executive director of the Claude Pepper Center at Florida State University, stressed, “Despite the immediate feel-good results of the election, Democrats could hand over the huge advantage they have on Social Security and Medicare, if they agree to cost reductions as part of a Grand Bargain. For Democrats, those programs are the family jewels.”

A record number of Latino voters gave 71 percent of their votes to President Obama on Nov. 6—including a record 47 percent of Florida’s Cuban vote. An even higher percentage of Asian-American voters (74 percent) cast votes for Obama.

But some advocates for immigrant and minority families worry that Democratic leaders could continue to embrace the idea of making bipartisan history with Republicans by lowering the national debt through tax increases and entitlement cuts.

“Latinos want a balanced budget, but they want government to be fiscally responsible, not cut programs that are so important to their families,” said Jeff Cruz, executive director of Latinos for a Secure Retirement (LSR), a coalition of 10 national Latino organizations. “They shouldn’t balance the budget on the backs of the poor.”

From the Latino perspective, Cruz asserted, “There are two roads President Obama can take in his second term. If he picks up on comprehensive immigration reform, the Republicans, even in the House, will be hard pressed to block it. That would damage them even more with Latino voters.”

“But if he goes ahead with his Grand Bargain and focuses on cuts to Social Security and Medicare,” Cruz continued, “those programs are very important to us. That’s not what we want. The American public rejected that approach in the election.”

In fact, nearly every candidate in the election who was endorsed by the co-chairs of the 2010 federal debt-reduction commission lost.

Even though the commission failed to agree on a federal budget plan, the two chairmen, former GOP Sen. Alan Simpson and Democratic investment banker Erskine Bowles, came up with their own unofficial proposal. Widely promoted in Washington as a blueprint for change, the Simpson-Bowles plan called for $4 trillion in reduced federal spending—including on social safety-net programs -- over 10 years.

Most of the candidates that Simpson and Bowles endorsed this year, from former Sen. Bob Kerrey, D-Neb., to Rep. Charlie Bass, R-N.H., were defeated.

Observers say those most at risk of losing retirement benefits are not seniors who have already retired, but near-retirees -- those over the age of 50 who will need these programs once they retire.

“Many minorities—especially those over 50 who are near retirement--are realizing they will be more dependent on Social Security, Medicare and Medicaid,” said Florida State University’s Polivka, a former director of the Florida Agency for Aging and Disabled Services.

“Minority pre-retirees are in worse shape than ever,” Polivka said, hit hard by the mortgage and foreclosure crisis; falling interest rates; the increasing Social Security full-retirement age; and, for the relative few with 401(k) or similar pensions, their financial losses from the recession.

The question now is whether Democrats will protect these programs, or put them on the chopping block in an attempt to reach a compromise with Republicans.

In the long term, Polivka said, there are several factors pointing in the Democrats’ favor.

Polivka said not only do Democrats have a significant diversity edge over Republicans, but “Democrats can reach out to working whites, who are worried to death about their retirement. They could get to parity with the GOP with those voters by 2016, even with working white males who don’t have a college education. Along with women and minorities, they could lock in the party’s majority status for the long term.”

But in the short term, Democrats may be forced to compromise. Even a seemingly modest compromise on Social Security, such as changing the formula for calculating the annual cost of living adjustment (COLA), would have a troubling impact on seniors struggling to make ends meet.

“For minorities, the change in the COLA would mean major reductions in Social Security over time for the vast majority of them,” said Polivka, who has been a consultant to federal and state agencies.

An analysis by the Congressional Budget Office has shown that under the proposed change, by age 75, the average Social Security recipient, who now receives a modest $14,000 pension per year, would lose the equivalent of $560. By age 85, when elders need the income the most, they would receive almost $1,000 less.

Polivka noted a new analysis of retirement savings by the Center for Retirement Research at Boston College. The study found that from 2007 to 2010, the percentage of those at risk of having a financially insecure retirement jumped significantly.

“As of 2010,” says the Boston College study, “more than half of today’s households will not have enough retirement income to maintain their pre-retirement standard of living.”