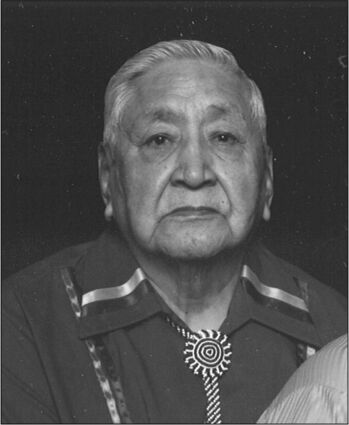 Funeral Services will be 2:00 pm Saturday, November 10, 2012 at the St. Mary’s Catholic Church in Red Lake, MN with Fr. Jerry Rogers officiating. A wake will begin Friday, November 9, 2012 at the Little Rock Center and continue until the time of service on Saturday. Interment will be at the Fort Snelling National Cemetery under the direction of the Cease Family Funeral Home of Bemidji.

Bill was born Sept. 6, 1921 in Red Lake, Minnesota, the son of Joseph and Mary (Sumner) Strong. He was raised and educated in Red Lake, graduating from Red Lake High School in 1941. He served in U.S. Army at the Air Force base hospital in Santa Ana, Calf. during WW II. He then attended and graduated on the G.I. Bill from Whittier College in Whittier, Calf. with a degree in Physical Education. He was an excellent basketball player who played throughout his childhood at Red Lake, in the Army and ended his career playing for Whittier College. He then moved to Chicago where he worked 20 years at the Sargent-Welch medical device company retiring in 1971 as head of the shipping/receiving department. He returned to Red Lake where he worked for CAP for several years. He married Joan Slater on Sept. 6, 1984 in Bemidji. He loved all sports and was a devoted fan to many teams. He loved Nature, tending yards and going to the casino.

He was preceded in death by his parents, sisters- Olive and Maggie and brothers – Melvin, Burton, Harvey and Joe.

Messages of condolence may be left at ceasefuneralhome.com.