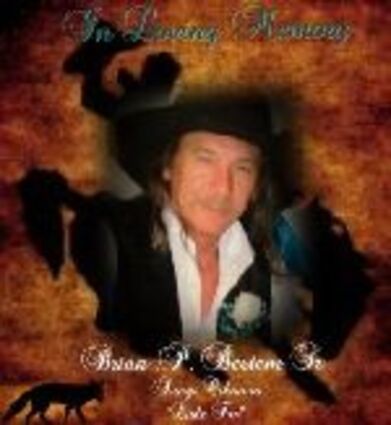 He was born on December 15, 1958 in St. Louis, Missouri the son of John Beetem and Evelyn WhiteTurtle.

Brian was a self employed painter for many years.

On June 9, 2012, Brian and Kay were married at his sister’s home this past summer.

Brian’s son was the light of his life!

Brian was an out doors person.

He was an avid fisherman and hunter. Brian loved hunting for the elderly. He also enjoyed taking his nieces, nephews and neighbor children fishing. Brian also was fond of horses. He was the oldest of the family and very protective of his brother and sister. He enjoyed picking wild flowers and giving them to the girls in his family.

He had a good sense of humor and when he made friends, he made life-long friends! He was a very loving and compassionate person. He especially loved dancing to Country Western muisic.

Survived by wife: Kay Beetem; a son: Brian Beetem Jr .; a brother: Robert Beetem; a sister: Jacqueline Beetem; many other relatives and friends.

Preceded in death by his parents and by a sister: Lisa Josephine in 1964.

Funeral services for Brian Beetem Sr. will be held on Friday, November 9th, 2012 at 2:00 P.M. at The Ascension Presbyterian Church in Big Coulee. Officiating will Filmore Simon, CLP and Milton “Nippy” Owen.

All night wakes will be held on Wednesday, November 7th and Thursday, November 8th at Big Coulee District Center beginning at 7:00 P.M.