The bar is open for Mystic Lake diners 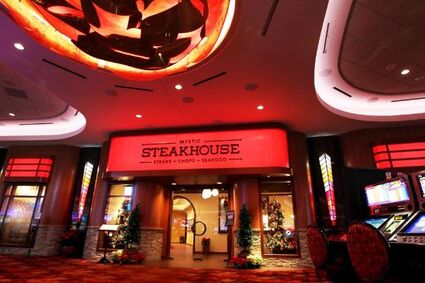 Diners who visited Mystic Lake’s steakhouse Wednesday were the first in the Prior Lake gambling complex to be able to order alcohol.

Alcohol started flowing for the first time on Wednesday at Mystic Lake Casino's hotel, with drink service soon to follow for gamblers doubling down at the blackjack table or trying their luck with the slots.

The hotel, part of the casino complex in Prior Lake that is operated by the Shakopee Mdewakanton Sioux Community, said it would first offer beer, wine and liquor at its Mystic Steakhouse when the restaurant opened at 5 p.m. Wednesday.

Mystic Lake has long been one of the state's few dry tribal casinos, mindful of the negative effect that drinking has had on generations of American Indians. But the tribe is shifting its position after having watched revenue suffer along with the economy and years of requests from guests in the 20 years since the casino opened.

Alcohol service was also set to begin in the property's meeting and convention areas, and it will be added to the menu when renovations are complete at the hotel's Meadows Bar & Grille on Nov. 14.

Service bars are scheduled to open "within the next month" on the gambling floor, said Edward Stevenson, president and chief executive officer of the SMSC Gaming Enterprise, which runs Mystic Lake. Meantime, guests are welcome to bring drinks from the dining locations to the gambling area.

Drink service at the Mystic Showroom will start Nov. 21, but hotel guests will not be able to order alcohol through room service.

Longtime tribal Chairman Stanley Crooks, who died Aug. 25, had been adamantly opposed to selling or profiting from the sale of alcohol at Mystic Lake. Although his death seemed to have cleared the way for a change in policy, tribal and community sources say he knew of the impending change and that it had to be considered to boost revenue, which has suffered during the economic downturn.

Mystic Lake is the state's most popular casino and is located nearest to the state's primary population center. Until now, Red Wing's Treasure Island Resort and Casino was the closest to the Twin Cities that served alcohol.