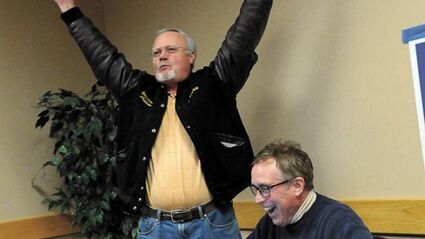 innesota House District 2A candidate Roger Erickson, DFL-Baudette, celebrates early Tuesday night as he learns he has the lead with 1 percent of the votes tallied. Beside him is Mike Simpkins at the DFL celebration party at Bemidji’s Holiday Inn Express. Monte Draper | Bemidji Pioneer

Legislators earn $31,140 per year, plus a per diem for living and travel expenses during the session. Senate seats are four-year terms while House seats are two-year terms.

Skoe, who is finishing his third term in the Senate, is a past chair of the Property Tax Division of the Senate Tax Committee. He serves on the Tax, Agriculture and Environment committees.

Skoe said he would work for rural areas of the state and use his business experience to keep the environment good for Minnesota businesses. He said he is open and accessible.

Moser, a retired farmer and truck driver, is president of the Clearwater County Food Shelf.

Top areas of concern for Moser were energy stability, the regulatory environment for Minnesota job creators, taxes, spending and governing. He said keeping taxes down is important. Parties must work together, with give and take on both sides.

Hancock, who is finishing his first term, is a retired small business owner, having owned and operated R&D Tire from 1985-2008.

He said the region should wisely use its resources in agriculture, forestry, minerals and water. He stressed the importance of growth of the private-sector economy. Increased taxation would suffocate job growth, he said.

Erickson, a retired teacher and coach, said the biggest issues facing residents of the district were, in the short term, jobs and economy. Long-term issues, he said, were utilization of resources and control of aquatic invasive species. He said he’d work with both parties.

Sailer, a recycling/solid waste management consultant, represented state House District 2B from 2005-2010, but lost to Hancock in the 2010 election. She returned this year, but with redistricting placing Hancock in District 2A, Sailer was pitted against Green.

Sailer said during her campaign that she would work for a “sensible, fair and balanced approach to cuts in spending and new revenue,” and said jobs and protecting water resources and energy were also priorities.

Green, a Heier Township supervisor for more than a decade, said during his campaign that township government was the most pure form of government. He said over-regulation of logging, manufacturing and logging industries is the biggest issue facing the district.