Will Natarajan Be the First Indian American Mayor of Fremont, Ca? 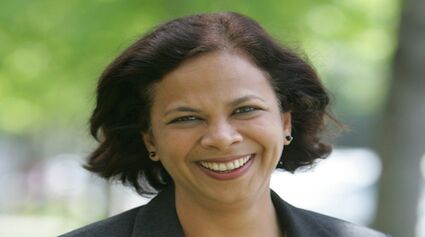 FREMONT, Calif. – A clipboard in hand, wearing a black blouse, jeans and sneakers and with a pencil tucked behind her ear, mayoral candidate Anu Natarajan spent a recent Sunday precinct walking, like she has been doing for several weeks now, a handful of “Team Anu” volunteers in tow. She was hitting the homes of the still undecided, hoping to persuade them that she’s the best candidate to be Fremont’s next chief executive officer.

“It’s a completely grassroots campaign, and that’s the way I want it to be,” she told a reporter accompanying her.

The mayoral race is crowded, with the three front-runners being Steve Cho, a Republican and Bill Harrison, a Democrat and City Council member, a democrat, and Natarajan, who is currently the city’s vice mayor.

Natarajan is used to being in testosterone-rich political surroundings. When she became a City Council member in 2006, she was the only woman on the five-member council until the next election cycle in 2010, when Chinese American Suzanne Chan came on board.

Earlier this year, Natarajan served a brief stint as Fremont’s interim mayor, after the death of Mayor Bob Wasserman.

Natarajan said she feels just as comfortable embracing her Indian heritage as being American -- she became a naturalized citizen in 2003 -- but she maintained she never plays the Indian card among fellow expatriates to win votes.

“Although I am proud of my Indian roots, I am not defined by my Indian heritage, ” she asserted, noting: “I don’t run my campaign as a woman candidate or an Indian-American candidate.”

The platform she is running on – creating more green and biotech jobs, luring high-end retail shops, developing a pedestrian-friendly downtown – in its 56 years, the city has never had a downtown – and improving its public transportation system by building a third BART station in Warm Springs – seems to resonate with voters. They believe she can tap into her academic training, as well as her professional experience as an architect, public agency planner and an urban planning consultant, and make Fremont a more vibrant city.

“I like the vision she has for our city,” observed Dr. Romesh Japra, chairman of the Federation of Indian American Associations, and chair of the Fremont Hindu temple, who hosted a fund-raiser for Natarajan last month in his home. “She is hard-working and committed to public service.”

“She is a very result-oriented person and definitely ready to take up the city’s leadership,” said Jeevan Zutshi, founder of the Indo-American Community Federation.

The race between her and Harrison is close, and even though the 50-year-old Natarajan is disappointed that her opponent has received the endorsements of unions and the Political Action Committee of the Fremont Chamber of Commerce, the backing she has been receiving from other sources has kept her campaign energized. Last week, State Attorney General Kamala Harris endorsed her, recognizing Natarajan’s successes in bringing “more jobs to Fremont, and to keep Fremont’s neighborhoods, schools and parks safe” for its residents. Harris is the state’s first Indian American female to serve as attorney general in the state.

The Bay Area News Group, which includes such media outlets as The Argus, The San Jose Mercury News, The Oakland Tribune and the Fremont Bulletin, is supporting her. Additionally, 16 Bay Area mayors and 38 council members are also backing her.

In the 2010 Census, Fremont with its 218,000-strong population and located in the northernmost part of Silicon Valley, was listed as one of five cities in the Bay Area with the highest Asian population. Yet Asian-American turnout at the polls tends to be among the lowest of any racial and ethnic group in general, and Fremont is no exception.

Of the 34,000 Indian Americans in Fremont, which is only about 1,000 more than the city’s Chinese American population, only 11,000 are registered voters – a situation Natarajan believes is largely because they tend to have “the-one-foot-here-and-one-foot-in-India syndrome.”

Even so, she believes 80 percent of them will vote for her.

One prominent Indian American activist who most likely won’t is veterinarian Dr. Raj Salwan, who hosted a fund-raiser for her opponent, Bill Harrison, even though he says he views Natarajan as “my sister.”

Natarajan has received good marks for her consistently supporting open space, while at the same time exploring ways of leveraging space for the city’s economic development.

And she knows how to work “with other cities and build public-private relationships when state funding drops,” observed Yogi Chugh, a political activist.

Natarajan currently leads the "Realizing the California Dream" project of the American Leadership Forum, Silicon Valley, which aims to create governance and fiscal reforms in California.

The Tamilnadu-born candidate, who was raised in Bangalore, came to the United States 22 years ago on a Rotary scholarship to earn a master’s degree in urban Design and Planning from the University of Washington. Her subsequent professional experience includes working as an architect, public agency planner, and as an urban planning consultant to cities across the Bay Area.

Some time during that period, she met her husband, Sundaram, whose love for cooking, she said, helps keep her campaign in high gear. Their 9-year-old daughter, Pranali, who has been observing her mother’s political activities for years, stood before the gathering at Natarajan’s mayoral campaign kickoff and urged them to help her mother get elected because she would ensure that Fremont becomes “the best city, would tell people to stop smoking and stop wasting food and hold a lot of kids events.”

“I definitely have a third democrat in the house,” observed Natarajan as she watched her daughter with pride.