Warroad casino may bring tourists but some locals fear impact 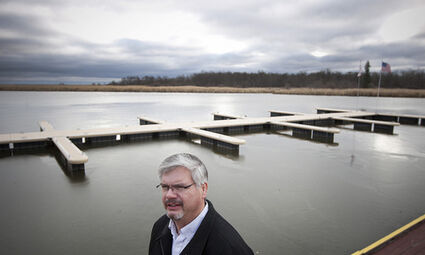 Ray Brenny, Red Lake Gaming Chief Executive Officer, stands on the marina of the Seven Clans Casino at Warroad, Minn. that will be moved to a new site in the background where a new hotel and casino is slated to be finsihed May 1, 2014. photo by Eric Hylden/Grand Forks Herald

WARROAD, Minn. — Residents of this town of 1,700, long known as the home of walleyes, windows and hockey sticks, are excited about the visitors, the lodging, the jobs and the convention space that a new Seven Clans Casino will bring.

However, they’re not as unified about the uptick in gambling.

The Red Lake Band of Chippewa Indians recently announced that it will build a four-story structure that will have a larger casino, a 60-room hotel, a convention area and dining options.

The complex will be located where the Warroad River and Lake of the Woods meet, prompting the band’s plan for fishing packages to be part of the allure.

“It will help us grow tourism,” said Steve Hagen, owner of Doug’s Supermarket and the president of the Warroad Chamber of Commerce. “It will help us attract people year-round. Now, we have lulls in our economy, mostly in the early spring, before the fishing opener.”

“We’ve had times here where there haven’t been enough motel rooms,” said Donna LaDuke, executive director of the local Convention and Visitors Bureau. “We also have limited space for meetings and conventions, so this will be a draw for meetings that incorporate entertainment and business.

“Our business community is pretty excited about it.”

The new facility also will increase casino jobs from 200 to 300, which is important in a town where its major em-ployer, Marvin Windows, has scaled back hours because of a manufacturing downturn nationally. The company has received national acclaim for not laying off workers, but its workforce has declined through attrition.

The casino growing in size and amenities from its current small, makeshift operation is not universally embraced, however.

Rev. Wayne Maxwell of Woodland Bible Church said all five clergy members in his morning coffee group are op-posed to the expansion, but realize they have no say in the matter.

“We don’t think the added jobs will offset the negatives that a casino brings,” Maxwell said. “Bringing a larger ca-sino promotes more gambling and the bad effects it has on families.

“It’s an addictive behavior that we say is morally wrong. We as pastors deal with the aftereffects of addictions.”

Ministers are not planning any organized protest. “Native Americans are allowed to have casinos on their land and will do it because it makes money for them,” Maxwell said.

John Horner, who is challenging Mayor Bob Marvin in Tuesday’s election, said he is concerned how more casino traffic might impact the city. He wondered: “With infrastructure, utilities, snow removal and law enforcement — will this be more of a strain on taxpayers? If so, what do we get for it?”

Local sentiment about the news is mixed, said Rebecca Colden, publisher/editor of the Warroad Pioneer newspa-per.

“Some people are excited about the growth, the opportunity and something more coming to town,” she said. “Then you have others who think it’s an added burden, with concerns about if we’re going to be ready with our fire and law enforcement departments.”

Work on the $27 million project will begin in December with the clearing of its 168-acre site, according to Red Lake Gaming CEO Ray Brenny. The site sits across the Warroad River from the present 20-year-old casino, which is a combination of a former fishery and a white structure with a dome-like appearance.

Construction’s first phase is highlighted by the four-story casino/hotel/restaurant, scheduled to open May 1, 2014. Also planned to be ready for opening day are 75 boat slips and a campground. Two more phases will follow, including a convention center and greater emphasis on outdoors components.

“We want to piggyback off being on the gateway to the Lake of the Woods,” Brenny said. “We want to take advantage of the lake by offering a fishing launch service and having fly-in fishing trips to Canada.”

For size, the Warroad site will be in the middle of Seven Clans’ three casinos in northwest Minnesota.

The Warroad casino will be twice the size of the casino that is on the southern border of the Red Lake Reservation, 21 miles from Bemidji. But it will be considerably smaller than the Thief River Falls’ facility, which has 150 rooms, 550 employees and a water park.

The Thief River Falls casino caters more to family outings because of its water park centerpiece. And Warroad’s casino supposedly will cater to people who enjoy gambling or fishing or both.