Beltrami County Board: Mobile homes must be removed, land cleaned up 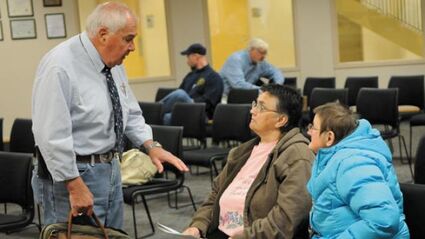 Beltrami County Commissioner Quentin Fairbanks talks with Carol Schmidt, center, and Janice Brown before the county board’s regular meeting. The board voted Tuesday to order the demolition of three mobile homes and abatement of other public health violations on Schmidt’s property, where the two women previously lived in separate mobile homes and where more than 100 dogs were removed in January. Monte Draper | Bemidji Pioneer

Three mobile homes on Carol Schmidt’s property near Bemidji must be demolished, and Schmidt and fellow resident Janice Brown must remove debris from the property to abate numerous public health violations, the Beltrami County Board decided Tuesday after a public hearing in which Schmidt declared her desire to return to her former home.

Schmidt and Brown previously lived on the property in separate trailers, the same property from which 107 dogs and two cats were taken in January. These two trailers, along with a third that has extensive fire damage, were ordered demolished.

The women were removed from their homes shortly after the dogs were taken, and both trailers were condemned. Schmidt now lives in an assisted living facility, while Brown lives in a separate care facility.

“I’m happy to tell you that over 85 percent of the animals were adopted — that was fantastic,” said Bill Patnaude, Beltrami County Environmental Services director, who brought the notice of public health violation and order to abate before the board.

Schmidt said she believes she can do the cleanup and other work needed in order to return to the property, where she lived for 57 years.

“I have firm convictions that I do not think Carol can get the property cleaned up,” Patnaude said.

Neither of the trailers in which the women lived had sanitary facilities or running water, Patnaude said. They got their drinking and washing water from a hand pump well. Urine and dog feces were found on the floor in both homes.

Patnaude showed a series of photos showing the conditions of the trailers and surrounding property.

“It was very apparent there were no means of handling garbage,” Patnaude said, pointing to large piles of garbage on the property.

Schmidt said that when her father, who lived on the property in another trailer, died in January 2010, it was hard for her to want to live there.

But now, “I want to live in my dad’s trailer,” she said. “It doesn’t bother me anymore. It did, when he first passed away. … There’s nothing wrong with my dad’s trailer house. It’s a warm trailer; it doesn’t leak, because my dad sealed it.”

She told the board she would need a hot water heater and could get by with a sewer tank until she could have a new sewer put in.

When it came time to make a motion to vote on the abatement order, the commissioners were silent and solemn for a few moments, clearly finding it a difficult decision to render in light of Schmidt’s deep desire to return to her home.

Commissioner Richard Anderson, who had seen the property around the time the dogs were removed, finally spoke up.

“From what I saw, and what I’ve heard since, I would move that we would go forward with the abatement,” he said quietly.

The board unanimously voted for the order, which states that all “filth, garbage, furniture, appliances, clothing and food items” must be removed from the trailers in which the women lived. Those trailers, and the burned trailer, must be demolished. Building debris must be disposed of at the Beltrami County Demolition Landfill. Garbage, refuse, solid waste and appliances must be removed from all mobile homes, structures and vehicles on the property and disposed of properly.

“We’re going to work with you,” Patnaude told Schmidt and Brown after the meeting. Schmidt will have the opportunity to go through items on her property and select some items she wishes to keep.

Keisha Hanson, case manager with Beltrami County Health and Human Services, sat near Schmidt and Brown during the meeting. She took over reading a statement from Schmidt to the board after Schmidt became too emotional to continue.

“Keisha is here representing her client,” Patnaude said. “I respect her for that.”

Environmental Services and Health and Human Services will work as a team, he said, to carry out the abatement order while also helping Schmidt and Brown.

“Carol’s desires are admirable,” Patnaude said, adding that his job is to take care of the public health violations, “and do it with empathy and compassion.”

“We have to recognize that hoarding is a mental illness,” he said.