If the election is about women, what are they gaining? 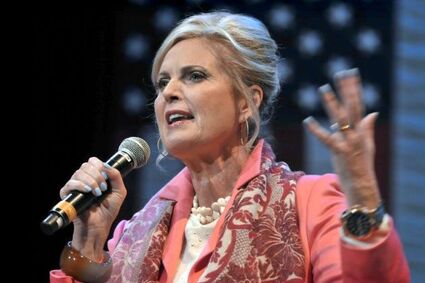 Ann Romney speaks to a crowd at an Elizabethtown College rally Monday, Oct. 15, 2012. She called on women voters hit especially hard by the recession to rally behind her husband, saying they would have a brighter future under a Mitt Romney presidency.

Hey, women! The election is suddenly about you. Sort of.

This was supposed to be the election about job creation (although we're still waiting for specifics). But in recent days it is about President Barack Obama losing women voters to Gov. Mitt Romney.

It's about Republican candidates for the Senate mouthing such absurdities as rape victims can't get pregnant and pregnancies conceived through rape are intended by God and must not end in abortion. It's about Romney refusing to disavow such politicians.

How ironic that as much of the world moves to repress women (a 15-year-old girl is shot in the head for advocating education for females), many in the United States want to take reproductive rights from women.

How ironic that those who advocate less government want government deciding that women should not have control over whether or when they bear children.

This is not about each man or woman's personal decision to be pro-choice or pro-life. This is about politicians taking away the control women should have over their own bodies. This is about a few people (mostly men) using their personal religious beliefs to affect the futures of millions of women they'll never even meet.

The current Congress has managed to get very little done, but Republicans have held more than one vote each week trying to curtail reproductive rights.

By the way, a lot of these control-freak politicians want to cut the budgets for government programs that help women trying to rear children on their own while increasing military spending by $2 trillion.

Romney said on the record that he would be delighted to see the end of Roe v. Wade, the 1973 Supreme Court decision that legalized abortion. He said he would be a pro-life president who would defund Planned Parenthood, which provides contraception and health care to millions of women. He wants to deny funding to any international organization that supports abortion in any form. He undoubtedly would nominate Supreme Court justices (three vacancies are likely in the near future) who would strike down Roe v. Wade.

Romney enthusiastically endorsed Richard Mourdock, the GOP Senate candidate from Indiana, who said "even when life begins in that horrible situation of rape, it is something that God intended to happen." Romney's campaign distanced him from Mourdock's remarks but did not pull an ad endorsing Mourdock.

Obama noted rape is a criminal act. He portrays abortion and contraception as pocketbook issues for women and their families. He is crisscrossing the country trying to convince women swing voters that Romney's promise to create more jobs than Obama is illusory. Economists say no matter who is elected, 12 million jobs will be created in the next four years.

But many women who voted for Obama in 2008 are disillusioned. Their families are struggling financially. Obama's health care plan has not gone fully into effect so they don't know whether or not it will help them. Millions are unable to find full-time jobs or livable wages. They blame the president even while admitting he inherited a mess.

The touted gender gap seems to have disappeared as the Nov. 6 election nears. Just as Romney and Obama are neck-and-neck in the popular vote, women are divided 47 percent to 47 percent on Obama and Romney.

Women in this country should not be subject to the vagaries of politics and politicians who either are courting the religious right or who themselves want to impose their religious views on everyone.

Decisions on reproduction should be made by women and their doctors, not by politicians who are convinced one rule fits all.

Many conservatives advocate positions that would restrict women not just on their reproductive rights but also on pay equity, the equitable cost of health insurance and coverage limits, workplace conditions, job advancement and other issues that adversely affect the economic progress of women and their families.