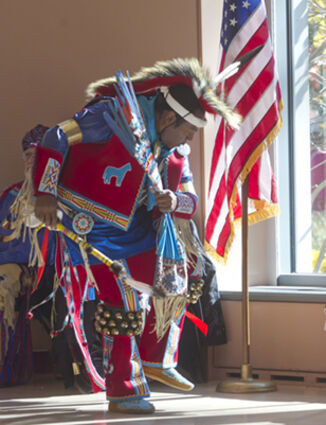 Dancers in regalia will again perform as part of this year's IU Pow Wow.

BLOOMINGTON, Ind. -- For the second consecutive year, Native Americans will gather at Indiana University Bloomington to share history, culture and arts at a traditional pow wow.

The event will be from 11 a.m. to 6 p.m. Nov. 3 and 4 at Union Street Center, 445 N. Union St. It also will serve as the kick-off event for IU Bloomington's observance of National American Indian Heritage Month.

Other events in November will include a lecture and workshops. All the events are free and open to the public.

The pow wow is being presented by the Native American Graduate Students Association, the First Nations Educational and Cultural Center and the IU Student Association.

"Pow wows originated from the development of inter-tribal culture, where people share their experience of being native in the United States," said Brian Gilley, director of the First Nations Educational and Cultural Center and an associate professor of anthropology. "They present a level of solidarity among the multi-tribal populations who have disparate political and social agendas. It becomes a meeting point for all of those different cultures."

The pow wow will feature authentic American Indian arts and crafts as well. A highlight will be performances by drum groups and singers and the ceremonial "grand entries" representing tribes from across the United States. "Gourd dancing," at 11 a.m. Nov. 3, will take place before grand entries and honors veterans and community elders. A traditional meal will be served at noon Nov. 3, free of charge, and crafts will be available for purchase.

The host drums will be Brave Heart from Pine Ridge, S.D., and Sauk Nation from Meskwaki, Iowa, and Thaigi, Okla. Terry Fiddler, a Lakota from Red Wing, Minn., will emcee the event. Gilley expects the pow wow could attract several hundred people from across the Midwest.

Other National American Indian Heritage Month events will include:

• Public lecture by Walter Echo-Hawk, 6 p.m. Wednesday, Nov. 7, in the Grand Hall of the Neal-Marshall Black Culture Center, 275 N. Jordan Ave. Echo-Hawk, a member of the Pawnee Nation, is a speaker, author and attorney. This event is sponsored by Themester 2012, an initiative of the IU College of Arts and Sciences. He also will speak to students at 10 a.m. Thursday, Nov. 8, in Frangipani Room of the Indiana Memorial Union, 900 E. Seventh St. Throughout his distinguished legal career, he has worked to protect the legal, political, property, cultural and human rights of Indian tribes and Native peoples.

• Native American Beading Workshop with Master Artisan Marilyn Cleveland, a Cherokee and White Mountain Apache, from 10 a.m. to 4 p.m. Saturday, Nov. 10, at the Mathers Museum of World Cultures, 416 N. Indiana Ave. Registration is required for this workshop. Lunch will be served at noon. To register, contact the First Nations Educational and Cultural Center at fnecc@indiana.edu or 812-855-4814.

• Western Cherokee Double Wall Basketry Workshop with Master Artisan John Johnson, a Cherokee, from 10 a.m. to 4 p.m. Sunday, Nov. 11, also at the Mathers Museum. Registration is required. Lunch will be served at noon. To register, contact the FNECC at fnecc@indiana.edu or 812-855-4814.

• A special installation of recent acquisitions from the Elinor and Vincent Ostrom Collection at the IU Art Museum, 113 E. Seventh St., throughout November.

People attending their first pow wow should be aware of basic etiquette, which is mostly simple respect and common sense. For example, ask permission before taking photos of dancers before, during or after dances. A dancer's clothing is a treasure, an expression of history, with some regalia handed down through generations. Always ask permission to touch regalia.