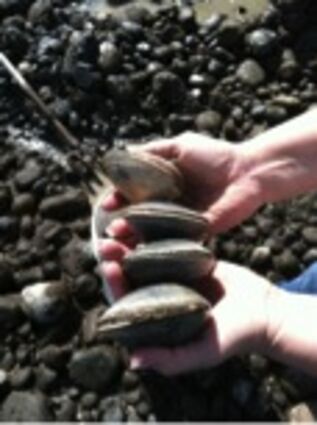 Salish Bounty—comprised of historic photo images, map, and informative text printed on free-standing banners—reminds us that food isn’t solitary; cooking and eating are things we do with other people and express our cultural history and values. The exhibit also includes a 4-minute audiovisual DVD, offering archaeological insight into Coast Salish food resources spanning thousands of years along the Duwamish River.

Knowledge of Coast Salish cuisine has been passed down from the elders and supplemented by archaeological and historical research. More than 280 kinds of plants and animals have been identified as ingredients in this cuisine. Contemporary Coast Salish cooks incorporate both traditional and newly introduced ingredients, sharing traditions to create healthy alternatives for families and communities still struggling with loss of lands and waters, drastically changed lifestyles, and imposed industrial foods. Salish Bounty provides a local perspective on a myriad of 21st century food issues and how, as in many places around the world, the revival of Coast Salish food traditions embodies the reestablishment of more healthful and sustainable practices that honor land and community.

About the Hibulb Cultural Center and Natural History Preserve

The Hibulb Cultural Center and Natural History Preserve is dedicated to those who have gone home before us and those who remain to keep the cultural fires burning. The Hibulb Cultural Center features a fully certified collections and archaeological repository. The Center features a main gallery, a temporary exhibit (Warriors, We Remember: Tulalip Veterans), two classrooms, a research library, an interactive longhouse and a gift shop featuring Coast Salish and hand made products.

The Natural History Preserve will open in the spring of 2013 and is 42 acres of walking trails with interpretative signage and exhibits. http://www.hibulbculturalcenter.org

About the Tulalip Tribes

The Tulalip Tribes are federally recognized successors in interest to the Snohomish, Snoqualmie, Skykomish and other tribes and bands signatory to the Treaty of Point Elliott. The 22,000 acre Tulalip Indian Reservation is located north of Everett and the Snohomish River, and west of Marysville, Washington. The Tribes maintain an aggressive environmental preservation program, both on and off of the Reservation to complement the Snohomish region’s natural resources: marine waters, tidelands, fresh water rivers and lakes, wetlands, and forests. Developable land and an economic development zone along the I-5 corridor provide revenue and services for Tribal members. Tribal government provides health and dental clinics, family and senior housing, utilities, cultural activities, schools, childcare, higher education assistance, recreation, cultural and historical activities. The Tribes have approximately 4,000 members, with 2,500 members living on the Reservation. The governing body is the seven-member Tulalip Board of Directors. For more information, visit http://www.tulaliptribes-nsn.gov.