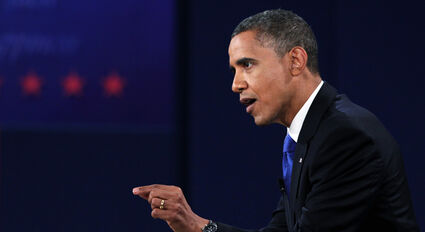 On Monday night viewers got an full evening of American posturing on militarism and war in the third and final presidential debate on foreign policy. It was within that context that both GOP presidential candidate Mitt Romney and President Obama steered the debate to their best domestic policy ideas for regaining the United States’ position as a global leader in, well, just about everything. It’ll start with education reform, Obama and Romney both said.

“Over the long term, in order for us to compete with China, we’ve also got to make sure, though, that we’re taking — taking care of business here at home,” Obama said on Monday. “If we don’t have the best education system in the world, if we don’t continue to put money into research and technology that will allow us to create great businesses here in the United States, that’s how we lose the competition.”

Obama’s couched his education reform agenda in a global competitiveness frame for years, and he repeated his talking points again last night. And indeed, it became the essence of both Obama and Romney’s education remarks for the night. That is, that the mandate for United States classrooms is to out-educate American students to beat back the specter of China. For Romney’s part, improving the U.S. education system made it to point three of Romney’s famed five-point plan, which he reiterated again last night.

Romney touted Massachusetts’ top school rankings and took credit for those gains while Obama spoke about his commitment to hiring more teachers and his administration’s Race to the Top, a competitive grants program to compel states to adopt Obama’s school reform strategies in exchange for cash.

But the most heated exchange on education came via class sizes, a topic that the Obama campaign has seized on as a way of distancing the president from Romney, who this spring said that “Just getting smaller classrooms didn’t seem to be the key,” arguing, ABC reported, that the issue was something “that’s promoted by the teachers unions to hire more teachers.”

And if we’ve got math teachers who are able to provide the kind of support that they need for our kids, that’s what’s going to determine whether or not the new businesses are created here. Companies are going to locate here depending on whether we’ve got the most highly skilled workforce. And the kinds of budget proposals that you’ve put forward, when we don’t ask either you or me to pay a dime more in terms of reducing the deficit, but instead we slash support for education, that’s undermining our long-term competitiveness. That is not good for America’s position in the world, and the world notices.

Cutting class sizes is hardly the hallmark of Obama’s education reform agenda—test-based accountability schemes that seek to punish and reward teachers based on their students’ test scores are. And yet the issue is what Obama has consistently led with in his public comments as of late as the Obama campaign attempts to shore up support from parents and teachers, whose unions largely dislike the market-based reform strategies Obama’s championed as president. However, the fact remains, where education reform is concerned, Obama and Romney see eye to eye on quite a bit.