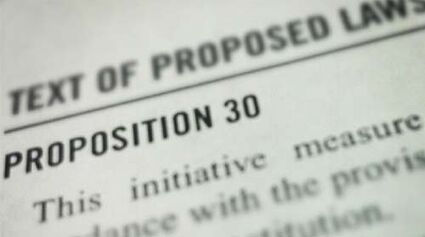 WESTMINSTER, Calif. – On November 6, millions of Californians will turn out at the polls to not only select a president, but to determine the future direction of public education in the state. As the date draws nearer, school districts struggling under already anemic budgets are watching closely.

"No election ever made me as nervous as this one," admits Andrew Nguyen, a board member with the Westminster School District, which serves the area’s sizable Vietnamese community. That’s because this year voters will decide on a measure that could make the difference between further cuts or additional revenue.

Prop. 30, Governor Jerry Brown’s tax initiative, calls for a temporary rate hike on those earning above $250,000, in addition to a quarter cent sales tax, with the funds going toward public education, including preschool and community colleges. If the measure fails, Brown has warned of potential trigger cuts that could amount to $6 billion starting in January.

California is expected to raise around $7 billion each year from the measure.

With so much on the line, Nguyen isn’t the only one sweating the results. Across the region and the state, districts are waiting with baited breath.

"If Proposition 30 is rejected, Garden Grove Unified could lose an additional $21.2 million,” says Lan Quoc, who sits on the board of GGUSD. That would be in addition to the $26.6 million that was cut last year and the $48 million cut over the past two years, he adds. The total amounts to roughly “one tenth of the district’s annual budget.”

Alan Trudell is a spokesman for the district. "Losing an additional $21 million would mean losing about $438 per student,” he explains. That would mean staff reductions, teacher layoffs, and increased class sizes. It would also likely lead to fewer programs, including those for sports and adult education, and delays in needed renovations.

It’s not a message officials are eager to send.

"This is a very sensitive issue,” says Quoc. “Of course we have a list of budget reductions for each item in order of priority, but we do not want to announce it early” as it could cause undue concern among employees of the district.

"We're making an effort to say there are no plans to lay off teachers or staff,” he adds. “We hope we can keep saying this for the foreseeable future. "

Quoc stressed GGUSD’s budget was developed under the assumption that Prop. 30 would not be adopted. "Our experience with state budget cuts over the years is that we cannot assume anything until the school district has the check in hand."

Westminster is a relatively small district, with about 10,00 students enrolled, most of them Asian and Hispanic. Cuts there have reached approximately $4 million, or around $418 per student. “As it is, the school district is forced to give students five to 10 school days off each year,” says Nguyen. “Teachers and staff aren’t paid during those days. If Prop. 30 doesn’t pass, the school district might have to be closed for up to a month."

In addition, class sizes in Westminster -- which in recent years averaged around 21 students per class -- could rise to as high as 30 students per room. Funding for teacher’s aides, meanwhile, dried up long ago, says Nguyen.

Unlike Garden Grove, which did not take an official position on either Prop. 30 or 38 – a competing measure that calls for an across the board tax hike, with funds going directly to districts -- Westminster has come out in support of both. The district even launched its own “Yes on 30” campaign, releasing a series of articles in support of Brown’s initiative.

Still, California voters have historically voted against raising taxes. In the past decade, they rejected 10 such measures and only passed one bill, which proposed to add an extra 1 percent tax on those earning over $1 million in support of mental health care services.

It’s a record that has education officials and community members alike feeling more than a little anxious.

"I don’t know if voters across the state understand the effect they will have on state education if they reject Proposition 30,” says Nguyen. “That’s what concerns me most.”