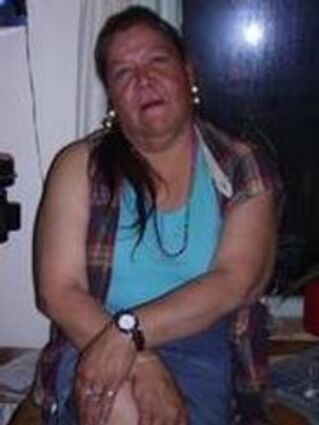 Alberta “Webby” Rose King, 52 of Seattle, WA died Saturday, October 20, 2012 at Havenwood Care Center in Bemidji. Funeral Services will be at 10:00 am Friday, October 26, 2012 at the Ponemah Community Center Spiritual Leader Steve Jackson. A wake will begin Wednesday, October 24, 2012 at 11:00 am at the Ponemah Community Center and go until the time of service on Friday. Interment will be at the Family Burial Grounds in Ponemah, MN under the direction of the Cease Family Funeral Home of Bemidji.

She was born February 27, 1960 in Red Lake, MN the daughter of Albert and Susan King. She attended school in Blackduck. She lived in Minneapolis, Washington and Arizona. She last worked for a Gem show in Seattle, WA. She loved gardening, cooking, walking and enjoying the scenery. She was always on the move. Webby was a woman who enjoyed life to the fullest. She was a kind and friendly person who was very easy to talk to. She was very easy going, befriended a lot of people, even strangers became her friend. She was a fan of the Seattle Seahawks and the Green Bay Packers. She was always looking forward to what was next in life. She was a great sister and was very loving. She loved her family and grandchildren and was a proud grandma.