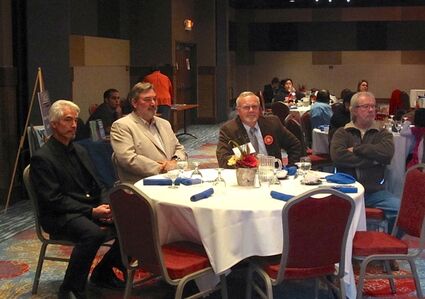 The Red Lake Political Education Committee (RLPEC), a tribal non-profit, and non-partisan organization, hosted a Candidate Fair on Wednesday, October 10, 2012, from 5:00 to 9:00 p.m. The Fair was held at the Red Lake Seven Clans Casino and Event Center.

The event was organized so that voters could get to know candidates better prior to the Minnesota general election on Tuesday, November 6. All candidates for local and state office who would represent the Red Lake Indian Reservation attended. Red Lake Reservation has over 2900 registered voters.

About 100 people attended the three hour informal event. Many of the attendees were Red Lake members, but members of other tribes and non-Indians attended the fair as well.

As is typical in Indian Country, the event kicked off with a light meal of chile and fry bread along with coffee. At about 5:15 p.m., RLPEC co-chairs Michelle Paquin Johnson and Gary Fuller welcomed the still eating crowd, and told a little of the groups history.

Paquin Johnson explained the rules. “Questions will be submitted in writing on 3x5 cards to our moderator to cut back on audience speeches," she said. “Candidates will have a two minute open and closing, and one minute answers to questions submitted by the audience.”

The co-chairs then introduced the moderator of the forum, Red Lake personality Jon Roberts who began the fair/forum.

Some of the issues the school board candidates discussed were bullying, the possibility of posting grades on-line, and dealing with kids with low self-esteem.

Few questions were able to be answered because of time constraints, but all candidates encouraged those in the audience to call on them if they would like answers to specific questions and where they stood on all issues.

Next came the Judicial candidates, John Melbye and challenger Diana Sweeney. The candidates differed little on most issues, but there seemed to be a contest with the individuals on various aspects of court room experience, Sweeney claiming to have more.

Many of the questions from the audience reflected the perception of inequality in the courts perceived by many Red Lakers, as well as racial profiling.

“I am aware that a higher percentage of Indians come before the courts than members of the majority population”, Melbye said. "Much of that problem is due to social issues such as poverty, lack of jobs, and alcohol abuse. These are some of the reasons for the disparity."

Sweeney agreed and went further when she said, “I believe the system victimizes the poor and that people in poverty sometimes commit traffic offenses because they can’t afford insurance and licenses. Laws must be applied fairly,” she said. Both agreed that socio-economic factors influence the higher percentage of Indians that show up in court.

Other issues discussed were profiling, longer sentences for domestic abuse, same sex marriage, and the Judiciary and Red Lake working better together through open communication, cooperation, and mutual respect.

"Vote No on Voter Restriction November 6," said Kathleen Blake representing the group 'Our Vote, Our Future.' The voter restriction amendment is costly and poorly written with serious consequences for eligible voters," she said during a ten minute break between forums. ("Yes" advocates were invited but declined)

"Minnesota's election system is recognized nationally as the best. Our system isn't broken," said Blake. "There is every reason to protect our existing system and no reason to make such a costly and harmful overhaul."

Blake then went on to site three reasons to vote no. The voter ID amendment is:

• Unnecessary: photo id laws only prevent voter impersonation, a crime for which no one has ever been convicted in Minnesota.

• Expensive: The proposed amendment imposes a new unfunded government mandate-forcing a choice between more cuts for vital services or higher taxes. The secretary of state's office says that the cost to local governments could be as high as $50 million to implement the complicated new system.

• Extreme: the amendment places unfair hurdles in front of active duty military personnel, elders in nursing homes, rural and absentee voters, students, the poor and minorities. There is no provision that exempts tribal ID's.

Next up were candidates for Beltrami County Commissioner, District 4 (Red Lake's District) Both candidates are Red Lake members, incumbent Quentin Fairbanks and challenger Tim Sumner. The candidates may represent another "Red Lake First" as this may be the first time in state history that two Indians are running against each other for a non-tribsal office.

Fairbanks said he hasn't come very often to give reports to the tribe, however he "maintains close communication with three members of the Tribal Council, and I feel there is a good relationship between the county and the tribe," he said. "There is much more to the county board business than just roads and social service."

Fairbanks closed by talking about his 12 years of experience on the county board and asked to be reelected. He then looked at Sumner and graciously offered to aid Sumner in anyway Sumner saw fit in the event that he (Fairbanks) should lose.

Sumner, who said his slogan was "New Leadership; Fresh Voice" said he would visit with the Tribal Council at monthly meetings from time to time to maintain good communication. "I think it's important to have that government to government relationship, there are ways the county and tribe can work better together," he said. "I'll also do the same for city governments in the district if they would like me to visit on occasion."

When questioned about communication with the Sheriff's office, Sumner said that he had introduced himself to the Sheriff and said he looked forward to visiting with him more should he be elected. "I'll do all I can to work with all county Directors and programs, as well as the Sheriff, to maintain open and good communication."

Both agreed that it was important to treat everyone the same in the district both on and off the reservation.

Some of the issues discussed were the sales tax agreements between the state and the tribe, jobs, education, Indian Education, peat mining, balanced budget, partisanship, and working together on a government to government basis.

All agreed that the state should not enter into the gaming business in competition with Red Lake or any other Indian tribe, although Hancock said Red Lake needs other sources of wealth to become economically independent.

About 8:30 p.m. all questions asked, RLPEC co-chairs took the podium again. Paquin-Johnson thanked all the candidates and the audience for attending, while Fuller encouraged "everyone to get out and vote on Tuesday, November 6, 2012 and to Vote No on the voter restriction amendment." 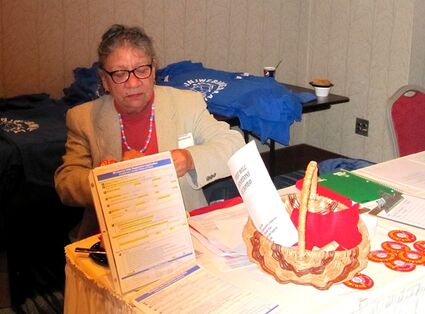