By Will Chavez
Cherokee Phoenix 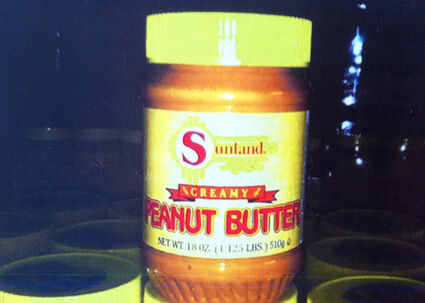 Speaking at the Oct. 15 Community Services Committee meeting, Squirrel said on Sept. 24 the U.S. Department of Agriculture issued a recall of peanut butter made by Sunland due to salmonella contamination. Salmonella causes diarrhea, fever and abdominal cramps.

As of Oct. 15, the Centers for Disease Control reported 35 people have been sickened in 19 states and there was concern that the number could grow with additional peanut products being added to the recall list. Sunland, which is based in Portales, N.M., has recalled more than 400 of its products containing peanuts.

Squirrel said the “good news” is there were no reports of any Food Distribution clients getting ill from eating Sunland-made creamy peanut butter that had been distributed at Food Distribution stores in Salina, Jay, Stilwell, Sallisaw and Nowata.

“It should have happened by now. The onset of symptoms is a half a day to three days or 12 to 72 hours, so no news is good news at this point,” Squirrel said.

He said the only affected product that Food Distribution had was Sunland’s creamy peanut butter, which was immediately taken off shelves when he learned of the recall.

Fliers warning clients not to eat the recalled peanut butter were placed in three strategic areas of the five Food Distribution stores – on shelves where the Sunland peanut butter formerly sat, on the stores’ front windows and on exit doors.

Squirrel said he got advance notice of the recall before the USDA called him, so said he took immediate action by warning clients about the possible danger.

“We started getting emails from clients that had seen it on Facebook or Twitter and then the next day the USDA got in contact with us to tell us this was happening,” he said. “So we had a full day’s head start pulling this stuff off the shelves and setting it aside. And what we did was we took it to the landfill and got rid of what we had.”

He said Food Distribution staff hauled 4,813, 18-ounce jars of the peanut butter to the tribe’s landfill and disposed of it by burying it, which was supervised by the CN Environmental Health Department.

The most susceptible to salmonella poisoning would have been the elderly and young children or someone currently under medical care, Squirrel said.

CN Communications Director Amanda Clinton said the CN did not distribute information to the public about the recall because the USDA distributed public notices and the Food Distribution stores posted notices about the recall. The notice warned clients not to eat the peanut butter and to throw it away.

“They (USDA) did all of the public notices on it. That’s what they’re required to do,” she said.

She added that stores usually don’t provide notices of tainted products, and it is up to the product’s manufacturer and the USDA to distribute information about a recall.

As of Oct. 15, the recall of peanut butter and other products from Sunland had been expanded to include raw and roasted peanuts. Sunland has recalled everything made in its contaminated plant since March 2010.

Sunland has recalled peanut butter brands sold at Trader Joe’s, Whole Foods, Wal-Mart, Kroeger, Target and Costco. The U.S. Food and Drug Administration has warned consumers not to eat any products associated with Sunland and to discard them because they might be tainted with salmonella.