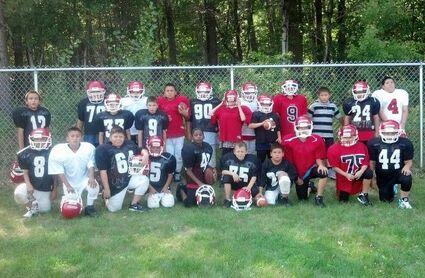 Red Lake, MN – The Red Lake Elementary Boys Football team hosted Cass Lake Elementary in a game held at 4:30 in front of a packed crowd of Parents, Grandparents, Uncles, Aunties, Cousins as well as several of the Jr Hi and Varsity team members. The two teams played each other in Cass Lake on October 2 with Cass Lake winning that contest. The boys were anxious to play them one more time despite Cass Lake being a real good team, and a much bigger team as their Elementary goes up to 6th grade. The Red Lake boys have been practicing since school started and is made up of primarily 3&4th, with a few 5th graders who joined later in the season.

The Panthers won the coin toss and received the kick and scored on a nice run around the end to take the early lead. After the kickoff, Red Lake took the first snap and ran a sweep right that went for 70 yards to the end zone before being called back for a hold on the wide receiver. I saw it out of the corner of my eye but was hoping for some hometown love by the ref until I realized he was from Cass Lake.

Red Lake was without their starting center and quarterback, which led to a few fumbles in the red zone, but the center did real good considering it was his first experience at it. Cass Lake used their size on the line and speed in the backfield to put together some nice runs of 50 + yards to grab the halftime lead. Red Lake took the opening 2nd half kickoff and got around the corner for a 55 yd return that was saved by a diving Cass Lake player with a shoe string tackle. Another fumble in the Red zone hurt, but one positive was the defense really stepped up and held them to 1 TD in the 2nd half. I knew we were in trouble though when my 4th grade defensive end got in the backfield and dove to hit the Quarterback, but bounced off the much bigger player. Despite being overmatched the kids kept playing hard and did manage to get into the backfield and disrupt some plays, and they never gave up.

Special thanks to my assistant throughout the season Mike Jourdain, Sr. and to the volunteer refs Kyle Fairbanks and Gerald Kingbird, Sr. and to the players who helped with the Chains. Also to all the fans who showed up to support the future of our football program, I can tell you that despite the result of the game, the kids really liked all the people who came watched, it was by far the biggest crowd I’ve seen at a game. We were originally scheduled to go in Cass Lake because they have a nice field and lights, but I wanted to give those fans who may not have been able make the trip a chance to watch the players at home, and it was the right move. My phone battery was dead and regretfully I didn’t get any game action pictures. This concluded our season, but the interest is already here for next season and I see the future bright for Red Lake Football!