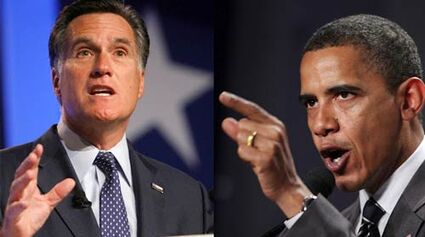 As Barack Obama and Mitt Romney squared off in the second presidential debate last night, New America Media editors posed 10 questions that have largely gone unasked -- and unanswered – in their campaigns.

Mitt Romney has pledged to finish the wall on the border with Mexico. What will that mean for U.S. relations with the country that gave his grandfather sanctuary as a polygamist?

Our prisons are overcrowded with people who were arrested on non-violent drug offenses. Street violence in American inner cities is largely a result of an illegal drug economy. Meanwhile, abuse of prescription drugs is a growing crisis. What would you change about current drug policy to alleviate these problems?

The Federal Poverty Line (FPL) masks U.S. poverty at a time when more Americans are struggling to make ends meet. What will you do to see that government figures are more honest--such as the new measure by the National Academy of Science? And what would you say to the growing numbers of people who aren't considered poor enough to qualify for assistance, but who are struggling just to get by?

The Asia-Pacific region is now in turmoil with many countries fighting over territorial rights over the South China Sea as well as the Eastern Sea, chief among them China. With so much at stake -- vast oil and natural pockets and potential rare earth and important shipping lanes -- how will the U.S. deal with this highly contentious situation and can it afford stay out of the skirmish?

There are still 166 prisoners remaining at Guantanamo Bay, and many of them have been there for over a decade. Though it’s off the radar for many Americans it is a sore point for many others who view it as a symbol of American imperialism and injustice. As president, what would you do about it? Will it be a permanent prison for those who are deemed ineligible for due process?

The U.S. is lagging behind other countries in education. Meanwhile, we are facing a shortage of teachers and the profession is becoming less diverse. What are you going to do to stem this decline in recruitment of qualified teachers and keep the teaching profession diverse?

Both of your campaigns have pushed for energy independence. Yet experts say the costs of this would be high and the solution would only be temporary. Energy independence sounds good but is it really achievable or is it a myth?

A new study by the MacArthur Foundation shows a widening gap in life expectancy in the past 20 years, with those at low education levels living up to 10 years less than people with higher education levels. How would you reverse this trend?

When is military intervention justified to prevent massive human rights violations, for example in North Korea or Syria?

We’ve put a man on the moon. We launched the Peace Corps. Periodically the president has inspired America to think about new frontiers. What’s the new frontier for America?