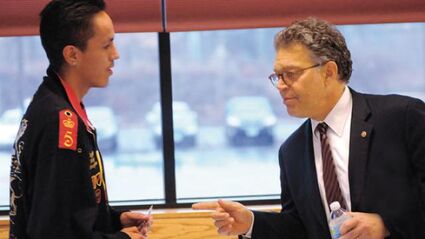 “I knew right then and there I had to turn my life around,” he said.

A bullet had entered his right shoulder and tore through his chest, collapsing his lung and shattering his left arm. His girlfriend, Angela Browneagle, encouraged him to consider his future and Goodman agreed.

“Honestly, I just wasn’t on the right path,” he said.

Goodman, a student in Anishinaabe 100, asked Franken for insight into how elected officials, and the general public, could be made more aware of the history and cultural trauma inflicted on American Indians.

Franken said it was a great question, adding that he would have to think about it a little while.

He described a visit to the Pine Ridge Indian Reservation in South Dakota, one of the poorest reservations in the country. He met a group of about five teenagers and asked them what they wanted to do with their lives.

One kid, maybe about 15 years old, jokingly said he wanted to sell drugs, just to gauge Franken’s reaction. They then spent about a half-hour talking.

Franken, who for 15 years was a writer and performer with “Saturday Night Live,” said he knew instantly that the boy was hilarious and genuinely talented.

“I told him, ‘You’re funny. You could be a comedian,’” he recalled. Franken encouraged him to finish high school and join a comedy group, such as The Second City troupe in Chicago, where performers Jim and John Belushi got their starts.

Franken speculated that the teen could become a correspondent on “The Daily Show” or another comedy show.

CASS LAKE – As Tim Goodman lay in the hospital recovering from a gunshot, he pledged to make significant changes in his life.

“I could not convince this kid that it was an actual path,” Franken said. “It really struck me because I could see it. I could see the path for him … but he did not see that it was possible.”

He also detailed the history of Rich Carmona, a U.S. Senate candidate in Arizona. Carmona, Franken said, grew up in Harlem with a father who did drugs and an alcoholic mother. He didn’t graduate high school, instead opting to join the U.S. Army with hopes of becoming a Green Beret. A high school diploma was required so he obtained a GED while in the military. In time, he went on to graduate college and become a doctor, police officer and public health administrator. He was appointed in 2002 by President George W. Bush to serve as surgeon general.

“Really, you can do anything you want,” Franken said.

Goodman, listening to the story from his back-row seat, interjected, answering his own question.

Goodman already is doing that in his own way. Last spring he was named the Mr. AIHEC for 2012-2013; he serves as the spokesman for the American Indian Higher Education Consortium. In that role, he represents about 38 tribal colleges throughout the country.

Goodman said he wants to be a strong role model for his 2-year-old son. Long-term, his goal is to work with the White Earth tribal government.

“I’m honored to be here every day,” he said of Leech Lake Tribal College. “This place has changed my life.