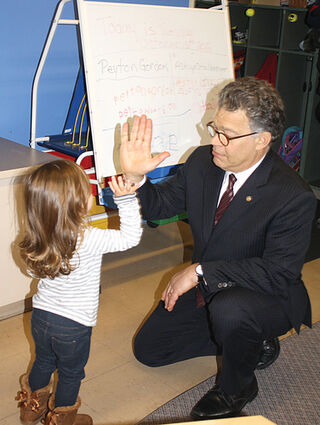 Franken’s first stop was the new Circle of Life Academy, where he congratulated students on a school that he called “heaven-sent.”

A member of the U.S. Senate on Indian Affairs, Franken told the gym full of students that he was glad to see them in a big, beautiful school after years of having to attend a school that “just wasn’t good enough” — a reference to the old, deteriorated Circle of Life School in White Earth.

The comedian-turned politician acknowledged behind the scenes that he wants so badly to crack the code on somehow convincing at-risk native youth that there is hope and potential in their future.

And although he says that can be a tough thing to do for some, he offered up his own life as an example to the students when he addressed them.

“My father didn’t graduate from high school,” he told the students. “My mother did, but she didn’t go to college. But they taught us that education was the key to living a fulfilled life.”

Franken went on to talk about his and his older brother’s collegiate talents in science, and despite the fact that becoming a successful comedian seemed unattainable, he went for it and did it.

And although White Earth students happily sang an Ojibwe song to Franken, a much more serious tone settled over the senator as he met with Tribal Chairwoman Erma Vizenor, key education leaders for the tribe and the reservation’s top security advisor for a round-table discussion on issues plaguing natives on White Earth.

“There is a huge increase in heroin and methamphetamine problems again,” said White Earth Public Safety Director and Chief of Police Randy Goodwin. “And we know that as a result of that, we have yet to see the influx of crime as addiction starts to really set in.”

Franken questioned Goodwin on who was bringing the drugs in and what they were doing about it.

“Some of the intelligence that we’re receiving is that the drug pushers are coming from Afghanistan and Mexico,” Goodwin said. “The heroin they’re pushing is very pure with the intent of getting everybody hooked, and once that happens, they start cutting back (on the purity).”

Goodwin told Franken tribal investigators are doing a backwards investigation on the problem, as they bust small, local dealers, then try to trace it back to larger dealers off the reservation.

“But it’s tough because we have more and more of our local people making trips to the Twin Cities to make small purchases, so by the time we’re able to get a search warrant, it’s already gone,” said Goodwin, who also told the senator that despite the fact that they were able to successfully shut down the Native Mob, a new, possibly more dangerous gang is starting to emerge on the reservation.

But despite the fact that Vizenor declared a state of emergency on the reservation due to the severe prescription drug abuse and illegal drug problem, she says it remains a topic they deal with at almost every tribal meeting.

“We take one step forward and then it seems like we take two steps back because we’ll hear about another overdose, but we’re working really hard on that,” said Vizenor.

The group all agreed that providing a good education to native students is their best hope of pulling out of a history of trauma, which kept Franken and his staff with their eyes on the ball — education.

And as Franken visited the Early Childhood Center on White Earth, a bright spot was found as educators there talked excitedly about the reservation’s recently awarded Race to the Top grant.

White Earth is one of four areas in Minnesota to receive the $45 million dollar grant, which is designed to help open up early childhood education to every small child on the reservation.

“Everybody should be congratulated for that,” said Franken of the grant.