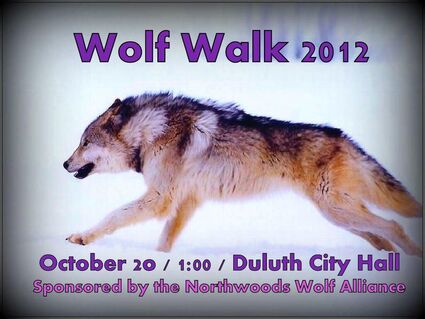 DULUTH, MN (October 9, 2012) Minnesotans from across the state are expected to rally in Duluth on Saturday, October 20, 2012 in a show of public opposition to the controversial MN wolf sport hunting and trapping season to begin November 3.

Wolf protection advocates are inviting the public to join them for WOLF WALK 2012.

The Duluth-based Northwoods Wolf Alliance and Twin Cities- based Howling for Wolves will be co-hosting WOLF WALK 2012 in Duluth, MN on Saturday, October 20th at 1:00 pm.

The groups will gather at the Civic Center Plaza, 411 W. First Street for a rally and then march to Lake Superior Plaza West (corner of Lake Avenue and Superior Street) to demonstrate against the planned wolf sport and trapping season and to encourage wolf supporters to contact Minnesota Governor Mark Dayton and DNR Commissioner Tom Landwehr and urge them to stop the hunt on the state’s legacy animal.

Howling for Wolves, along with the Center for Bio-Diversity, recently filed a lawsuit seeking an injunction to stop the sport hunt and trapping season. Howling for Wolves founder, Maureen Hackett, M.D. will speak at the event.

Also scheduled to address the group is Robert DesJarlait, Red Lake Anishinaabeg, member of the University of Minnesota Council of Elders and co-founder of “Protect our Manoomin.” DesJarlait will speak about the historical, cultural and spiritual significance of ma'iingan (the wolf) to the Anishinaabeg people. The speaker list also includes Lisa Herthel, a mother, grandmother, UW-Superior student and member of the Mole Lake (Wisconsin) tribe and Howard Goldman of the Humane Society of the United States.

The Little Horse Drum Group from the Duluth Native American community will perform at the event. They are Anishinaabeg traditional singers who want to protect the wolf and keep our traditional teachings strong. They sing for the community and have brought the drum and their songs to many community gatherings, celebrations and spiritual events.

The event is free and all people are invited to participate in the WOLF WALK 2012.