An Ojibwe view of Columbus Day 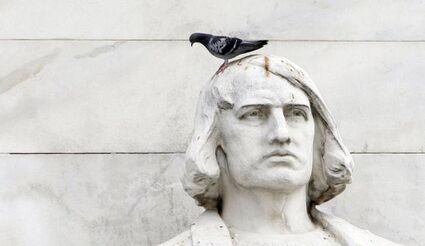 A pigeon sat on a statue of Christopher Columbus.

For American Indians, Columbus Day is not a typical holiday. We don't celebrate 500 years of being dominated, exploited, enslaved and nearly exterminated by Europeans. But we do celebrate our survival.

Diana King is an enrolled member of the White Earth Indian Nation in northern Minnesota. For the last 12 years, she has taught at the Waubun High School, which is located on a reservation.

"Columbus Day is a chance to teach about who we once were, what has become of us since Europeans arrived on our shores and who we are today - a struggling but surviving people," King says.

Each October, King creates a bulletin board that illustrates a rich display of indigenous life on the American continents circa 1492.

"One of my favorite displays is on the diversity of food (American Indians) harvested," she says. "From corn, coffee and squash, our foods are now on the world's dinner tables. Columbus and other 'explorers' may have taken our foods and other resources, but I like to look at it as a contribution from indigenous people."

King works closely with teachers at the school, especially in the area of history.

"I want teachers to teach more about Indian civilization just like they do with Egyptian or European history," she says. "Our history did not begin with Christopher Columbus."

And King also works with teachers on ways to integrate Ojibwe Indian cultural values in their curriculum.

"Even though 70 percent of our students are Native, most of our teachers are non-Indian," she says. "When I started here there were no Ojibwe language classes and there was no after-school program for Native students. Working with teachers to help educate them about our students about their culture and the issues they face living on the reservation is critical to promoting success."

King is quick to point out that one of the most devastating realities about living in a post-colonial world is the shame that has been forced on American Indians.

"When students learn about how advanced our cultures once were, they get a great feeling of pride," she says. "It validates them. And they also realize their culture is important to the world."

Survival is a key word in King's efforts to take advantage of the annual recognition of Columbus.

"We should have been wiped out," she says. "It's a miracle Native people still exist. I have never liked the word 'conquered.' We are still here after 500 years. And maybe every time Columbus Day comes around, we should rethink who the real heroes are: the explorer or the survivors?"

The answer depends on who is writing the story. More and more American-Indian people, like Diana King, insist on writing our own, especially on Columbus Day.

Mark Anthony Rolo is an enrolled member of the Bad River Band of Lake Superior Chippewa. He teaches at the White Earth Tribal and Community College and is the author of the memoir, "My Mother Is Now Earth." He wrote this for Progressive Media Project, a source of liberal commentary on domestic and international issues. Distributed by MCT Information Services.