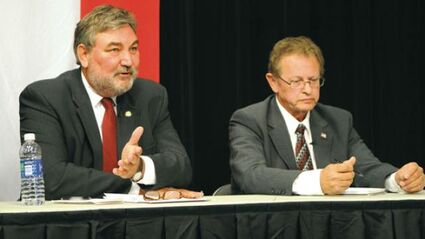 BEMIDJI – While a lot has changed in the last few years at the Legislature, the matchup for the Senate District 2 seat has not.

Like 2010, Rod Skoe, DFL-Clearbrook, will face Dennis Moser, R-Clearbrook for Senate District 2. Skoe won the 2010 race by 6 percentage points. The two debated on Lakeland Public Television as part of a series of debates on local legislative seats.

The district they will fight over has changed, however, with the new district no longer touching North Dakota and reaching the Canadian border.

Skoe said early in the debate that the fundamental difference between the two parties is in their tax policies. That difference showed Tuesday, and extended to other issues.

Throughout the debate, Moser touched on conservative values of personal responsibility, which he attached to opinions on health care, taxes and education.

In his closing comments, he said in tough economic times, “we need to be more frugal with what we have.” Moser also questioned why his taxes were being used for someone else’s child to go to college when they can get a loan or have their parents pay for it.

“I think we have to start to live within our means,” he said. “I don’t think everybody needs to go to college.” Moser added that there are many high-paying jobs that don’t require a college education.

Skoe, meanwhile, said that a large portion of the state’s budget is used for education.

“The school teacher is a government employee,” he said. “It’s not just regulation we’re talking about, it’s all the other parts of our economy and our world that rely on community funding.”

Skoe used his closing comments to advocate for tax reform and balancing the budget.

Aside from tax and financial issues, the two candidates discussed the issue of aquatic invasive species in the area several times during the debate Tuesday, with both underscoring the importance of natural resources to the area’s industries.

Skoe suggested that using general fund dollars to fight the problem of Asian carp and zebra mussels in the area’s waterways may be appropriate. But Moser advocated for using legacy grant money to address the issue.

On the same-sex and photo ID constitutional amendments, Moser said he was in favor of having voters decide the issues. Skoe argued that there is already a law that says the state doesn’t recognize same-sex marriage, and questioned how mail-in ballots would be handled if the photo ID amendment passes.

“I just think it’s not a good idea when you don’t know the ramifications to make changes to the Minnesota constitution,” Skoe said.