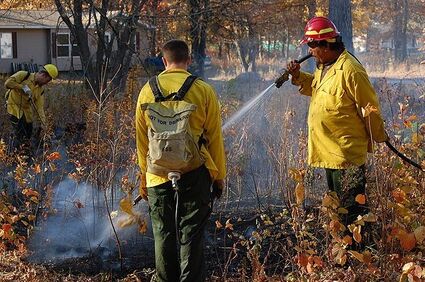 A Red Lake fire crew works to suppress a small grass fire in a residential neighborhood on the south side of the reservation. Tribal natural resource officals say three other fires, some near residential areas, were contailed and were being monitored on Tuesday. (MPR Photo/Tom Robertson)

ST. PAUL, Minn. — Some residents in the northwest Minnesota city of Karlstad are being evacuated due to a nearby fire that has already destroyed two homes on the outskirts of town, state fire officials said Tuesday.

Fire crews are fighting the blaze from the air and ground outside the city of about 700 people near the Canadian border, said Minnesota Incident Command spokesperson Jean Bergerson.

Dry, windy conditions are fueling as many as eight wildfires in northwest Minnesota, including blazes near Viking and Strandquist. The Minnesota National Guard sent two Black Hawk helicopters to battle the blazes. Fire departments from North Dakota are also assisting local fire crews.

In Karlstad, officials evacuated the local nursing home, school, assisted living center and a group home, all in the southern portion of the city. Some residents have also been evacuated and directed to Hallock, about 20 miles northwest of Karlstad.

"It's very smoky," said Gary Halverson, pastor of First Lutheran Church in Karlstad. The church is providing temporary shelter to some of the evacuees from the local nursing home. "People are complaining outside that their eyes are itching and watering."

The nursing home residents who need more care will be relocated to other facilities, he said.

The National Weather Service described fire conditions as "critical" and issued a red flag warning for most of western Minnesota and the eastern Dakotas.

A fire near the city of Viking has destroyed several structures. Officials evacuated several homes in the city of about 100 people, but the town itself is not threatened, according to state fire officials.

Roxanne Dunrud, who lives near the city, said her family removed photographs and other irreplaceable items from their home.

"Wonderful neighbors and wonderful fire departments from all over the area are here and saving houses," Dunrud said.

Jerome Peters, owner of the Viking Cafe, said fire crews and farmers are facing strong winds as they try to contain the fire. 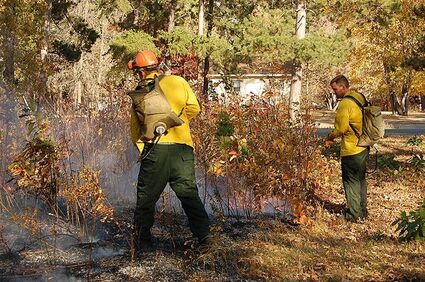 A Red Lake fire crew works to suppress a small grass fire in a residential neighborhood on the south side of the reservation. Tribal natural resource officals say three other fires, some near residential areas, were contailed and were being monitored on Tuesday. (MPR Photo/Tom Robertson)

"Farmers are going out there with their chisel plows and trying to make a fire break, but it's so windy here that it just jumps everything, jumps over the road, jumps over any kind of barricade that they try to make," Peters said. "So it spreads real quick."

Three fires are reported on the Red Lake Indian reservation, but all of them are contained, according to a fire management officer.

A blaze broke out south of the town of Red Lake earlier in the day, and came close to some houses, but ground crews stopped it with assistance from a tanker crew.