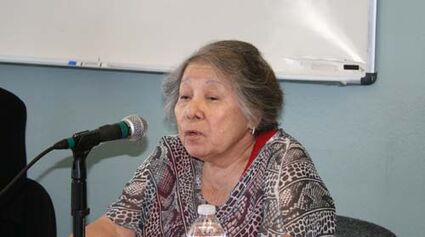 Gerri Goncalves, in photo, says seniors she helps as a California AARP volunteer and her daughters’ generation are scared Social Security won’t be there for them. (New America Media/Dana Levine)

SAN FRANCISCO—When Gerri Goncalves regained her strength after her heart attack some years ago, she began volunteering for AARP’s advocacy efforts in Sacramento, California’s capital, to help other seniors stand up for their rights.

Goncalves, who has worked with AARP for six years, told ethnic-media reporters at a New America Media briefing last Thursday, “You can’t imagine the amount of people that are making so little money they are just living on their Social Security.”

The whirl of presidential campaign rhetoric around potential cuts to Medicare, Social Security and other programs in order to reduce the National Debt, prompted Goncalves to note that seniors she works with “are asking, if there are any cuts, how are they are going to survive. They’re just scared right now.”

Goncalves, who lost her job in the wake of her health problems, said she doesn’t know “how I would have survived” had she not tapped into early Social Security retirement benefits, food stamps and other public assistance.

She added, “I depend on Social Security and luckily have daughters who assist me now. But it’s scaring them that they might not have Social Security” when they need it.

However, experts at the briefing, which AARP sponsored, explained that although Social Security and Medicare are vital to the nation’s well being, the public needs to become more aware of their importance across generations.

Social Security, with a current surplus fund of $2.7 trillion and growing, is fully funded for the next 20 years, said Cheryl Matheis, AARP’s senior vice president of policy, in Washington, D.C. Even without modest adjustments it could pay 75 percent of its promised obligations for decades beyond 2032. (Medicare is more complicated, she said, because policy makers need to address not only this government program, but escalating overall health care costs in the United States.)

Matheis said AARP has created a new program to help older adults make their views known directly to decision makers. She stressed, “After years of paying into Medicare and Social Security, they deserve a voice in their future.”

To date, Matheis said, as many as 3 million of AARP’s 38 million members have used the organization’s You've Earned a Say website to review a dozen options for Social Security and Medicare — written “without the political jargon and spin” —by respected authorities on both sides of the debate. Members can send their opinions to presidential and congressional candidates with a mouse click.

“This is not a partisan issue,” stated Fernando Torres-Gil, director of the Center for Policy Research on Aging at the University of California, Los Angeles. “But rather it’s about to what extent to we feel these programs are important to the overall retirement, health and economic well being of Americans. And to what extent do they now comprise a crucial safety net for those who otherwise would be deeply in poverty.”

Today, he said, seniors and their families are more reliant than ever on social insurance programs. In 2011, he noted, 84 percent of Californians 65 and older received Social Security checks, which accounted for more than half of the typical beneficiary’s income. In fact, he said, the program pumped $67 billion into the state’s anemic economy.

Torres-Gil, who headed the U.S. Administration on Aging under President Bill Clinton and is now a member of AARP’s national board of directors, described a confluence of factors that have increased public fears about the solvency of the nation’s retirement-security programs.

The recession has amplified economic anxiety among millions of Americans, who lost much of their retirement savings, found their homes economically underwater and—especially for those nearing retirement—and have struggled to keep their jobs or find a new one after being laid off. Amplifying peoples’ uncertainty about the future, said Torres-Gil, have been worries that the nation’s economic woes might lead to further reductions in safety net programs.

A reporter at the media briefing questioned AARP’s controversial role as a Washington powerbroker that has agreed to unpopular compromises in the past with the White House and congressional leaders. Would the huge organization go along with proposals to curtail entitlement spending after the election as part of a "Grand Bargain" to keep the federal budget from careening over the so-called fiscal cliff, that is, to keep automatic budget cuts from going into effect, if Democrats and Republicans cannot cut a deal? Many advocates worry that such a deal would be made at the expense of vital services for vulnerable Americans.

Torres-Gil stated, “The board has not made decisions about the range of options being considered,” such as raising the retirement age, recalculating the annual cost of living increase, increase the amount of earnings subject to the payroll tax or modifying benefits. But AARP is monitoring its members’ views, such as those posted on the You've Earned a Say website.

California's Majority-Minority What U.S. Will Be

For the long-term, Torres-Gil, who oversees UCLA’s Latinos and Economic Security (LES) project, emphasized the critical role of Social Security and other social insurance programs for the country’s increasingly diverse population.

Torres-Gil explained that for two of five African American or Latino households receiving Social Security, the program is their only source of income. Among Asian and Pacific Islander seniors, almost 30 percent of married couples and 60 percent of older unmarried people look to Social Security for 90 percent of their income, he said.

Also, Social Security Disability Insurance provides at least 75 percent of income to more than half of its beneficiaries, he said. In addition, this program is extremely important for non-elderly refugees, who have faced post-traumatic stress or difficult transitions from their native countries.

Torres-Gil’s own family heritage opens a positive window on the nation’s multicultural future.

A childhood polio survivor, who is currently vice chair of the National Council on Disability, Torres-Gil explained his personal stake in working to generate an objective national dialogue about how Social Security and related programs protect Americans at fragile points in their lives.

One of nine children, Torres-Gil said his father was an undocumented Mexican immigrant to Salinas, Calif., who died fairly young. His mother, relying on hard work and Social Security benefits for widows and surviving children, eventually saw each of her children go to college.

Thanks to his mother, Torres-Gil said, “all of them have families, all are working—and all nine of them are taxpayers.” That includes both liberals and conservatives among his siblings whom, he likes to remind listeners, have reaped many benefits from those public programs. Not the least of them was Medicare, which covered their mother’s hospital care when she became ill in the years before she died.

Torres-Gil urged ethnic media at the briefing to educate their audiences—especially the young—about the crucial value of Social Security, Medicare and related programs to everyone in their communities.

“We are losing the younger voter,” he declared. “If we left it to voters 30 and under whether or not we should keep Social Security and Medicare, they would vote overwhelmingly not to not support the programs. They support it for their grandparents and parents, but they don’t believe they will receive a Social Security check or that Medicare will be there for them.”

Torres-Gil stressed, “Only if they believe it is relevant to them will we retain popular support for these programs, as this country becomes a majority minority nation.”