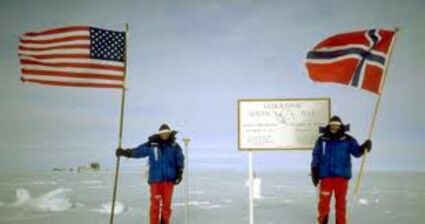 From the web site: http://www.amazon.com/No-Horizon-Far-Extraordinary-Antarctica/dp/0738207942

The Bemidji Public Library offers a monthly book discussion program. The next scheduled sessions are on Monday October 1, 2012 at noon and also on Thursday October 4 at 7:00 p.m. The discussion program will run for approximately an hour. At these two sessions in October, the book for discussion will be “No Horizon Is So Far” by explorers Ann Bancroft & Liv Arnesen. Ann Bancroft was the keynote speaker at the 2012 Bemidji Library Book Festival.

In February 2001, former schoolteachers Ann Bancroft and Liv Arnesen became the first women to cross the Antarctic continent on foot. Against all odds, they walked, skied, or ice-sailed for nearly three months in temperatures as cold as -35°F, towing their 250-pound supply sledges across 1700 miles of terrain riddled with deadly, hidden crevasses.

No Horizon Is So Far explores what drove Ann and Liv across the ice and ultimately into hearts and history books around the world. It traces the birth of their dream, its re-emergence when they were adults, their tenacious work to assemble the necessary money and gear, and their brutally taxing trek from the Norwegian sector to the American base at McMurdo Bay. About journeys both literal and figurative, each marked with suspense, danger, and incredible endurance No Horizon Is So Far celebrates two modern-day heroines and that which is heroic in all of us.

Extra copies of the book are available at the Library or at local bookstores. Book titles for the monthly series will come from the "Book Club in a Bag" made available through the Regional Library System http://krls.org/resources/resources.html

We are thankful to the individual donors at the Bemidji Public Library and from the Friends of the Brainerd Public Library for providing the extra copies for bookclubs around the Region.

Please join us for a lively discussion about great books !