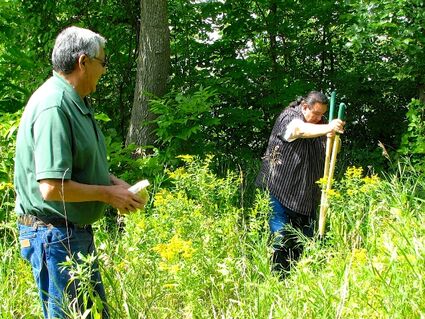 The ceremonies were held for lake access stabilization, erosion control, and stream restoration work. The appeasement rituals were led by Spiritual Leader Larry Stillday. Two vans were made available for those who wanted to car pool.

Those participating moved from east to west, according to custom, starting at Blackduck River Lake access, then to the cut-off, then proceeded to the Fisheries, Mud River, McKenzie, and concluded at Hallet Landing near Little Rock. 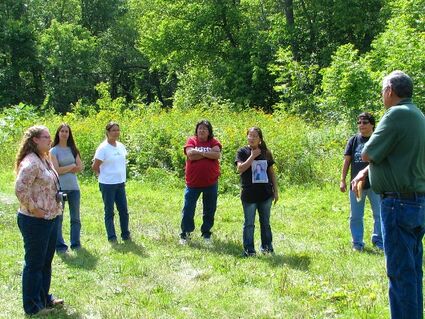 Spiritual Elder Larry Stillday explained the purpose of the ceremony to those gathered.

At Hallet, for example, when the access was built pottery shards were found during the ground disturbance. "Three may have been something here related to settlement," said Bohm. Some shards found were 2000 years old according to Bohm.

The ceremony conducted by Stillday included the planting of an oak post off to the side of the landing, just a bit out of site and to the East. The purpose is to create energy according to Stillday. The top of the post was debarked and painted red. After the planting, a red ribbon was tied to the post where the paint met the bark. After further prayer, now at the lake, a spirit dish was placed in the water - hidden behind a most convenient rock.