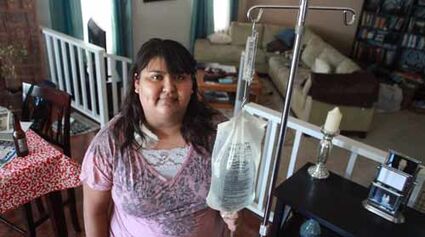 In 2007, when she was 23, the disease invaded her lungs and kidneys. She couldn’t breathe and was throwing up constantly.

She spent about three weeks in the hospital, and missed one month of work at United Way of Tulare County.

Two years later, in 2009, the disease reappeared as a red rash across her legs. The rash became “big, gushing, purple things” that scarred her ankles, caused her legs to swell, and impeded her ability to walk, she said.

She was in the hospital for three more weeks and missed three more months of work. She and her mother were the family breadwinners, and without Arrollo’s full paycheck during that time, the family could only afford necessities, like food, water and electricity.

A visit to the doctor revealed that while she did not currently have valley fever, her first bout with the disease had compromised her kidneys. The organs were no longer producing red blood cells, and were not performing their vital role of filtering waste products from the blood, she said.

Now, she has to undergo dialysis in the striped bedroom of her Fresno home four times a day, for about 30 minutes each time. She will eventually go on the waiting list for a new kidney.

She keeps a positive attitude, but does not sugarcoat her assessment of how the disease has depleted her energy, weakened her immune system, and lingered in her body.

She said she hopes that doctors will learn to recognize the symptoms and save more people from her fate.

“It is really a very dangerous thing when it goes untreated and goes unnoticed,” she said. “It is kind of like a silent poison.”

This story, which ran in Vida en el Valle in Fresno, is a part of the Reporting On Health collaborative, which involves several media outlets in the Central Valley.The collaborative is an initiative of The California Endowment Health Journalism Fellowships at the University of Southern California’s Annenberg School for Communication and Journalism.