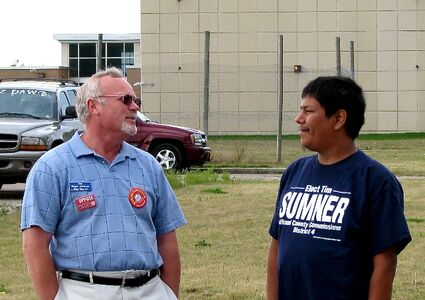 Visitors from around the United States and Canada came to the Red Lake Indian Reservation the end August and early September with nothing but positive things to say about the experience.

On Saturday, August 25, the Red Lake Bike Rally/Ride Against Youth Suicide, led off the Red Lake parade, an event held annually in conjunction with the Celebration. Riders lined up at the Red Lake Fire Department for the Parade at 10:00 AM, and were again the first in line to lead the parade.

Following the bikers were floats with Princesses and Braves who tossed candy that filled the streets, but only briefly, as kids scattered to pick up every single piece filling bags as if Halloween. Both Red Lake and Ponemah parades had contests for best in parade with categories such as best visitor, best local family, best business, and of course the ever popular "Rez Car."

At Ponemah, the parade started near the Trading Post and moved to the powwow grounds going once around the outside of the ring before parking. This 40th Annual powwow received kudos from many participants and seems to be outgrowing itself. The powwow ring was often packed, while a small tent city sprang up filling every conceivable space around the powwow grounds.

The 40th annual powwow had a Facebook page with scores of comments raving about the experience. The powwow had more participants than this writer has ever seen before. According to powwow organizer Wayne Johnson, more than 1000 dancers took part in the 1:00 PM Grand Entry on Saturday, and 700 souvenir tee shirts were given away.

Ponemah or Obaashiing is the most Native American census designated location in the United States by Percent, 99.20% American Indian.

Being an election year brings many politicians to the Reservation for these two annual events. This year however saw fewer candidates for unknown reasons.

There are contests for President, US Senator, and US Congress to decide on by election day, Tuesday, November 6, 2012. 9th Judicial Judge is also on the ballot along with, state senate, state representative, county commissioner, and Red Lake School board has six candidates vying for three seats.

On Red Lake's ballot for Federal office your choices are for President, US Senator, and US Congress. On the state ballot, voters will choose candidates for State Senate and State Representative.

In the non-partisan section, voters choose for 9th Judicial District Diana Sweeney or John Melbye. Red Lake also may choose who their next Beltrami County Commissioner will be, Tim Sumner or Quentin Fairbanks. And then in the local section, Red Lake will select three of six candidates running for school board.

Unfortunately the only politicians to show for both parades and powwows were DFL candidate for State Representative Roger Erickson, and Red Lake member Tim Sumner who is running for Beltrami County Commissioner. Both candidates participated in the parade and spent a good share of their time visiting with Red Lake voters at both pow wows. 9th Judicial Judge candidate Diana Sweeney attended the Red Lake parade and powwow.

The Red Lake Political Education Committee (PEC) was quite visible at both powwows registering 200 new Red Lake voters. All new registrants received a PEC tee shirt and button that says Biinjwebinigedaa! (Let's All Vote) See a PEC member for your button.

PEC volunteers in addition to registering voters providing information on candidates and issues. The biggest issue according to PEC co-chair Gary Fuller is the proposed Minnesota Constitutional Amendment to require Voter ID cards. According to Fuller, the amendment is a direct attack on Tribal sovereignty as tribal ID's will no longer be valid for voting.

"This is blatant attempt at voter suppression," says Fuller. "It's a direct attack on elders, poor people, and Indian Nations, folks that might not find it easy to obtain a state issued Voter ID card. I encourage all Red Lake members to vote, and then to vote NO on the Voter ID law."

Fuller goes on to explain that what the amendment doesn’t state on the ballot, is that the voter ID will be "state issued" and at a cost. The ID would require not only a photo, but an address which could be a big problem for anyone with a post office box, transients, etc.

Contact any Red Lake Political Education Committee member for more information on these candidates, issues, voter registration, and what you can do to get out the membership's vote so that Red Lake's voice will be heard loud and clear and with pride. "Red Lake almost has a responsibility to lead," noted Red Lake PEC co-chair Michelle Paquin Johnson.

The Minnesota Voter Identification Amendment wants to change the constitution so that all voters must present valid photographic identification before voting. The amendment also includes that the state of Minnesota must provide free photographic identification cards to any voters who do not have a photo ID. It also will permit voters who don't have photo ID to vote and submit a provisional ballot. The provisional ballot will then be counted if the voter can provide a photo ID.

The text of the Minnesota Voter Identification Amendment as it will appear on ballots is: 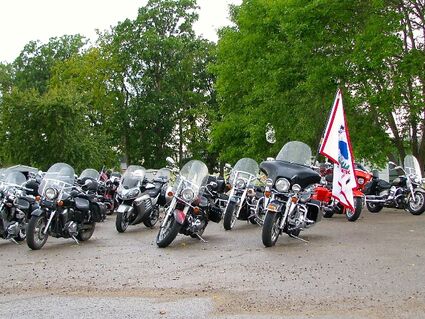 A vote of Yes would be a vote in support of changing the constitution, and require all voters to present valid photo identification before voting. Supporters of the amendment argue that this will improve election integrity, and reduce voter fraud.

A vote of No would be a vote against the amendment, and not change the constitution. The voting procedure in Minnesota would not be changed, and voters will be able to vote without presenting photo ID. Opponents of the amendment argue that voter fraud is very rare in Minnesota, and that requiring voters to present photo ID will make it harder for many people to exercise their right to vote. Minorities and seniors, two groups who are less likely to have a valid photo identification, are most likely to be affected.

What will happen if you don't vote on the Minnesota Voter Identification Amendment?

If you choose not to vote on the Minnesota Voter Identification Amendment, then your vote will be counted as a No vote.