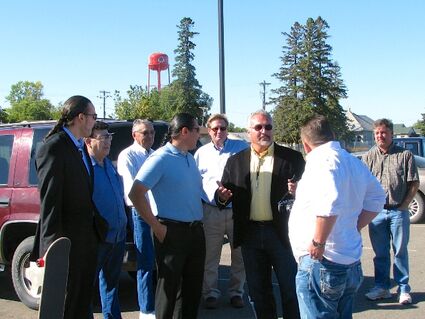 With but a week left of summer hundreds of people gathered at a spot twixt the old BIA building and the high school near Hwy. 1. It was Friday September 14, 2012 at about 3:30 PM. The occasion? The Grand Opening of the new Red Lake Skate Park.

Young and old alike visited and chatted on a perfect sunny day, with temps in the low 70's accompanied by a light breeze. Kids of all ages climbed a small grade to watch or skate the new "blue ribbon" skate park.

Off to the west, the aroma of charcoal burning permeated the air. Brats, burgers and chicken, were cooking on two large grills while folks dined under the shade of a large white tent. Tribal Council member and DNR Director Allen Pemberton was at one of the grills with the brats and burgers, while DNR Administrative Officer David Conner promoted his barbecued chicken.

Recorded music by DJ Mike D. was playing while a hundred skate boards traversed the hills and valleys of this first-class skate park.

Near the music, the Red Lake Political Education Committee had a table set with a lovely spread of buttons and tee shirts to be given away to those who registered to vote. Registrants and others were prompted to "Vote No" on the Voter Suppression (ID) amendment which will be on the Minnesota ballot on November 6. DFL candidate for state Representative Roger Erickson stood nearby in his Biinjwebinigedaa! (Let's All Vote) tee shirt, shaking hands and introducing himself to the membership.

A bit of a surprise to some, was that youth are coming from as far away as Bemidji and even Grand Rapids to try out the "state of the art" skate park. The potential of the popular site was on the minds of many at the thought of Indian and non-Indian brought together on the Rez sharing a common interest. Some talked of the need of a snack bar for the skaters. The park is so heavily used that kids are seen skating after dusk with nothing but the dim light of a school sign for illumination.

The skatepark groundbreaking took place this past April on the front lawn near Red Lake High School and was finished a bit ahead of schedule. The new park — as well as two new basketball courts — were built during the summer as part of an initiative to engage the community’s youth in activities that promote healthy lifestyles.

The 7,000 square foot park, (along with renovations to the basketball courts) was built a

s part of a grant from the Shakopee Mdewakanton Sioux Community. The guest of honor was Charlie Vig, newly installed Chairman of the Shakopee tribe following the recent death of former Chairman Crooks. Vig had been the tribes Vice-Chairman.

About 4 PM, half or more of the crowd climbed the small hill to the lip of the skate bowl. There Spiritual Elder Larry Stillday offered a blessing followed by a drum song.

Economic Development and Planning director Sam Strong acted as emcee for the event. After a short introduction and a background on the park, he called on Red Lake Chairman Floyd Jourdain, Jr.

"This park is for our kids," said Jourdain. "We are committed to develop positive activities for our youth to do around the rez besides basketball. The Tribal Council will continue to encourage youth to participate in arts and crafts, as well as sports and other activities."

Jourdain also took time to thank the school district who donated the land for skateboard park use. "The school district has let the kids skate in the parking lot for a few years - when others had chased the skaters off - and we thank them for that. Now they are giving us this land to use, in this great visible spot near the highway, we greatly appreciate that."

Charlie Vig, new Chairman of the Shakopee Mdewakanton Sioux Community, was then introduced by Chairman Jourdain. Vig flew up to Red Lake for the dedication. "Good weather is a good reason to get out of the office and come see good friends," Vig said with his seemingly perpetual smile.

"We like what you are doing for your kids," said Vig. "Once we saw this plan for a skate park, I told Chairman (Stanley) Crooks that we've got to do something like this. In fact I like a lot of the leadership programs you are taking part in here at Red Lake, I want to learn more about it - and set up a youth council at Shakopee like Red Lake has. We hope to learn that from you."

Red Lake youth seemed to be drawn to Vig, and he to them. He took lots of time visiting with the youth who will benefit by the new skatepark. Vig, sporting a skateboard in his arms, asked who in the crowd could use one, and quickly chose one young man for the gift. Several skateboarding youth accompanied Vig from Shakopee including one of his sons.

Red Lake Representative Roman Stately then took the microphone followed by Little Rock Representative Richard Barrett and Ponemah Representative Randy Kingbird. All had wonderful things to say about the new park along with a chi-miigwech to the Shakopee tribe.

Gifts were the next order of business. The first gift for Vig, was a Chairman Crooks memorial skate board with the Red Lake and Shakopee tribal logos featured prominently. Strong then gave Vig a watercolor painting by Patrick Desjarlait depicting Red Lake fisherman in his distinctive style. Shakopee provided a low-interst loan to re-start the Red lake fisheries after a lengthy moratorium.

Wrapping up the program was Ramona Dreyer representing the school district, and Economic Development and Planning staff person Margueritte Secola who announced the activities and demonstrations that would continue into the early evening. Secola also pointed out that a skate park is on the drawing board for Ponemah in 2013.

Post dedication activities featured a skateboard demonstration by Apache Skateboards and pro riders from Familia Skateshop. There was also be a product toss by No Comply Skateshop, "best trick" contests, prizes, skateboard clinics, lots of food and live DJ.

Park Four Years in the Making

Back in June 2008, Red Lake Tribal Administrator Lea Perkins was working toward getting a skate board park for Red Lake and Ponemah. In order to promote interest in that idea, Perkins arranged for the APACHE Skateboards Team to visit Red Lake for a demonstration that summer.

“It was kind of a kick-off event," said Perkins, “we hoped to have a park sooner, but now it is a reality." Apache Skateboards is a professional American Indian skate board team who originate from the San Carlos Apache reservation in AZ, in addition to being a manufacturer of skateboards and equipment. “The skate team is much more than trick demonstrations, they promote healthy lifestyles, creative goal setting, education, and positive attitudes towards being native through skating,” she said.

“There is much more to skateboarding than what might meet the eye,” said Douglas Miles, San Carlos Apache and owner of Apache Skateboards. “Skateboarding is non-competitive, it is a person versus themselves, it requires problem solving and use of space.” 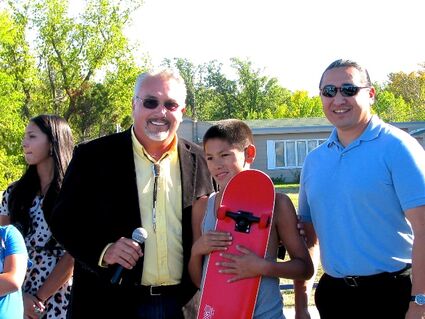 Chairman Vig gives a skateboard away to a young man in need of one.

When talking to Miles, one feels as though he could talk for hours about the positive aspects of skateboarding that most might never think of. “One has to think way ‘out of the box,' there are so many positive messages," said Miles, “and this can lead to a positive feeling of oneself.”

“Our Economic Development and Planning team conducted meetings with local skateboarders,” said Director Samuel Strong, “we took a survey and came up with some good feedback. The overall consensus was to build a street/plaza style park, with one or two bowl-like elements."

The planning team then contacted Miles of Apache Skateboards whom they consulted with regarding the concepts identified and a planning process. Miles team then, provided concept drawings and design which today is the Red Lake skatepark.