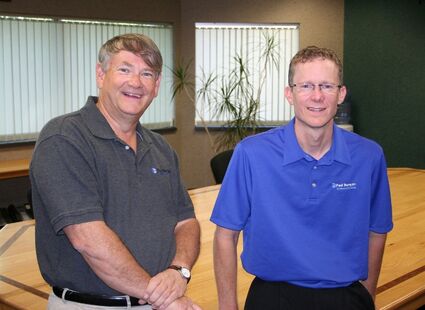 Paul Freude is on the left, Gary Johnson is on the right.

In addition to his successful tenure at Paul Bunyan Communications, Paul was instrumental in the formation of several of the cooperative’s subsidiaries and partnerships, including Pinnacle Publishing, Cooperative Development, and Cooperative Network Services. Several hundred local jobs have been created as a result of Paul Bunyan Communications’ expansion and the formation of these subsidiaries. Mr. Freude was extremely active in the state and national telecommunications industry, serving in key leadership positions within the United States Telecom Association, Minnesota Telecom Alliance, National Information Solutions Cooperative, and the Rural Independent Competitive Alliance.

“It’s hard to even put into words the impact that Paul has had on the industry and, even more importantly, the members of Paul Bunyan Communications. It’s overwhelming when you look at all the accomplishments achieved under Paul’s leadership” said Brent Christensen, President/CEO, Minnesota Telecom Alliance.

The cooperative’s Board of Directors has named Gary Johnson as the next CEO and General Manager of Paul Bunyan Communications, effective November 1, 2012. Originally hired as a computer programmer, Mr. Johnson has served in various capacities throughout his 23 years with the cooperative, currently as Chief Operating Officer and Assistant General Manager. As COO, he manages the marketing, public relations, television, Internet, web design, billing and customer service departments, focusing on Internet, video, and other broadband technologies.