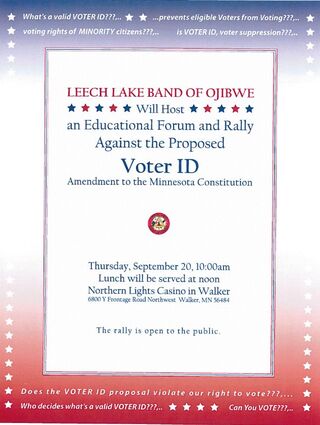 Cass Lake, MN—The chairwoman of the Leech Lake Band of Ojibwe has announced that her tribe will host an educational forum and rally against the proposed Voter ID amendment to the Minnesota Constitution on Thursday, September 20, starting at 10 am at Northern Lights Casino in Walker. The rally is open to the public.

“Many of our tribal members are unaware of how passage of this amendment could affect their voting rights,” said Tribal Chairwoman Cari Jones. “It would make it much more difficult for many of our members to participate in the democratic process.”

In 2006, Minnesota tribes took legal action against then-Secretary of State Mary Kiffmeyer, whose office refused to recognize tribal identification cards as legal IDs for voting purposes. The tribes won the fight, and tribal IDs have been recognized as equivalent to state-issued IDs for voting purposes ever since. The proposed Voter ID amendment would change that, and require all Minnesota voters, including tribal members, to present state-issued IDs in order to vote.

“The U.S. Constitution recognizes tribes as sovereign governments and not subordinate to, the state,” said Jones. “Every tribal member carries a tribal ID card already. Changing the law so that tribal IDs are no longer valid for voting purposes is nothing more than an effort to suppress the Native vote.”

Jones said that getting new state-issued IDs would present a serious hardship for many Indian people, especially elders, who lack transportation or use post office boxes as their primary mailing address.

“The goal of our democracy should be to maximize participation by all Americans, including those who have been marginalized in the past,” said Jones. “The Voter ID amendment would be a huge step backwards, not only for Indian people but for all those who continue to struggle for equal participation in our democracy.”