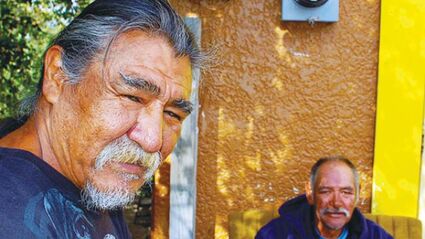 Red Lake tribal member Alvin Clark, left, sometimes comes to People's Church in Bemidji for meals, and he used to take shelter at the church when he was homeless.

BEMIDJI – When Alvin Clark needs a meal, he sometimes comes to the basement of the People’s Church, where poor people in Beltrami County know they can find help.

Clark, 55, is a member of the Red Lake Band of Ojibwe. Injured in a construction accident nearly 20 years ago, he lives on a Social Security disability check.

Many others also are battling tough circumstances in northern Minnesota. According to 2010 Census data, Beltrami County’s poverty rate is about 20 percent, or about double the statewide rate.

Clark, who lives in a small trailer on the reservation, was homeless for about 10 years, and spent many nights at People’s Church. He said rental housing in Bemidji is just too expensive for him because it’s a college town.

The People’s Church provides meals and shelter for up to 20 people a night, church caretaker Ira Keezer said. Although Census figures show the area’s economy is improving, he doesn’t see evidence of that.

“There’s still a lot of struggles out there,” Keezer said. “On a daily, weekly basis I see people struggling to find jobs, or jobs that pay a decent wage.”

Beltrami and a cluster other counties in northwest Minnesota have struggled with chronic poverty for decades. About one in five people in Beltrami County live in poverty that affects nearly a quarter of all children.

Last year, about 6,000 people received some type of public assistance, government statistics show. That’s 1,000 more people than received such assistance in 2009, at the start of the recession.

There’s a similar challenge in nearby Itasca County, where the economy still struggles to replace good-paying manufacturing jobs lost during the recession. Some of those lost jobs came from the timber industry, which was devastated by the housing market crash.

Itasca County is the home of Second Harvest North Central Food Bank, a non-profit agency that supplies food shelves in a seven-county region stretching from the Canadian border to just south of Lake Mille Lacs.

Sue Estee, the food bank’s director, said the number of households coming to food shelves in the region during the first quarter of 2012 is up nine percent from the same period last year.

“It seems that there are new families coming who haven’t needed services before, and most likely it’s because of long term unemployment,” she said. “People are running out of resources, whether that be their savings or their unemployment.”

There is no place harder hit by poverty than on Minnesota’s Indian reservations. Census data show that 45 percent of Red Lake children live in poverty, nearly twice the rate of Beltrami County as a whole. 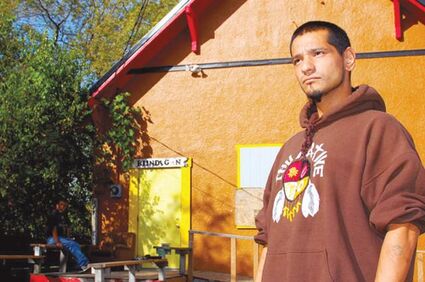 On the nearby White Earth reservation, many have grown accustomed to chronic poverty and double-digit unemployment. More than 40 percent of people in poverty are unemployed.

But there are glimmers of hope, Tribal Secretary/Treasurer Robert Durant said.

The tribe’s casino in Mahnomen added about 100 jobs over the past year, and Durant said federal stimulus dollars sent to White Earth created another 100 new jobs, many of them in construction.

Although Durant sees no end to White Earth’s poverty, the tribe does what it can to help the economy.

“Poverty is still a huge issue here. Unemployment is huge here,” he said. “As I go throughout the communities here, I only wish and I pray that something good is going to happen to help close this gap.”