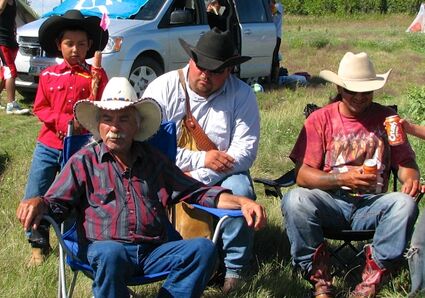 "First we thank Red Lake Nation for letting us enter their territory and camp near this sacred lake."

It was with a heavy heart that Henry Skywater (Dakota) began his ride. This would be the last such ride — at least for Skywater – who began the rides back in 1993. "I'm getting too old for these long rides" he thought, but when he found himself sitting on the same horse that he rode on his first spirit ride in 1993, his heart lifted and he knew that it was meant to be. Thus began a 250 mile journey, Spirit Lake to Red Lake.

Skywater and several horseback riders, runners and support staff would travel 20 to 30 miles per day beginning on August 6 and ending on August 18, 2012. The group would camp along the way. At campgrounds, parks, but mostly farms along the way — easier for the animals.

"Although there are those along the way who donate gas and food, all participants are volunteers and pay their own way," said Skywater. "This is not a fundraiser, accepting money would be contrary to the 'spirit' of the ride." One farmer provided bison and invited the group to harvest what they needed from his garden. "We ask for nothing but leave it up to folks to donate if they like," said Skywater.

This particular ride was at the request of Red Lake member (now deceased) Gary Silk. Silk had encouraged the ride in honor of victims and families — and all those who grieved — as a result of the Red Lake Tragedy in March 2005.

Some of the riders visited Red Lake at the time of the tragedy. Silk had asked the riders to come to Red Lake again in honor of the mourners for healing. The riders vowed to return one day.

Years have gone by since the last "memorial" ride and many of the original riders from 1993 have passed. It was decided to ride from Spirit Lake in memory of those riders who have passed, and to make that promised return to Red Lake, in honor of those who suffered during the tragedy.

"It was time to honor Gary's request," said Skywater. "We gave our Ojibwe friend Gary Silk the name of Tatanka Chante' which means "Buffalo Heart in the Dakota language." Skywater went on to say that in honor of Silk they named the ride after him, "Tatanka Chante' and Those Loved Ones Who Left Us, Memorial Unity Ride," which describes the journey well.

The riders and runners started their journey at Spirit Lake Nation in North Dakota on August 6 that culminated with a ceremony near the Red Lake Pow wow grounds on Saturday, August 18. The group started with 32 horses, but arrived at Red Lake with 22 horses and 15 or so runners/walkers, as some horses were not allowed to cross the Minnesota border. Along their journey, riders were approached by nonparticipants and asked to remember in prayer others who have suffered.

On Thursday, August 16 riders arrived at Frog’s Bridge having traveled from 7 Clans Casino near Thief River Falls. They were then shuttled to the Red Lake baseball fields for camping, then shuttled back in the morning to finish the 15-20 mile ride into the community of Red Lake - the journey finished.

And so on Friday, August 17 runners and horseback riders arrived at the fields near the Red Lake pow wow grounds in honor of victims, families, and all those who grieved during the Red Lake Tragedy. They were welcomed by many on this warm and sunny day; by children, the curious, mourners.

Ceremonies were held the following day on Saturday, August 18. Riders, runners and others gathered at Red Lake high school for a short memorial service and blessing. They then returned to the camping area where a larger ceremony took place, including the reading of names of Unity Riders who have passed, and all who requested to be remembered in prayer.

The first Unity ride grew out of a dream that the nephew of Henry Skywater, (Dakota) had in 1993. "He had the same dream twice," said Skywater, "where he saw ancestors in old regalia encouraging a ride to heal, and for unity for all peoples. After consulting with elders, we were told that rides should begin — to ride for unity and for healing."

The Elders had more to say. It must be a spiritual ride and therefore it was emphasized that there would be no drugs, no alcohol, and no firearms.

According to the consulted elders, all Nations would be welcome on the ride. Riders on this particular journey include non-Indians in addition to Dakota, Lakota, and Ojibwe peoples. There were African Americans and even a rider from England.

Skywater is from Birdtail (reservation) Manitoba. The very first unity ride in 1993 started at Standing Rock, ND and went to the Birdtail reservation Manitoba. Several other Unity rides have gone on over the years. One - readers may remember — started at Wounded Knee and ended at the "Four Corners" in the Southwest.

The group also rode to Washington, DC, Skywater remembers, "But we couldn't enter the city on horseback without a permit at a cost of $250 per horse. We never ran into such a thing anywhere else we traveled. So we rode as far as the DC border in Virginia and shuttled ourselves to the Capitol."

When asking who will speak on behalf of the ride, all point to Henry Skywater. But when approaching Skywater he denies leadership, saying he is "just one of many on a special ride." But he will concede that he may be one of the leaders, "mostly dictated by my participation in the first ride and so many since."

As Skywater makes himself comfortable for an interview by Lakeland Public TV News, he says, "First we thank the Red Lake Nation for letting us enter their territory and camp on this beautiful spot on this sacred lake." Then he turned to the young reporter and quipped with a mischievous grin, "Should I dress like a cowboy or an Indian?" before opting for a cowboy hat over a headdress.

"We ride for those who have passed that were involved in previous unity rides, but also and more importantly this includes the victims and families of the Red Lake tragedy, and for anyone who might ask for prayers for a loved one on the ride," answered Skywater to the question. 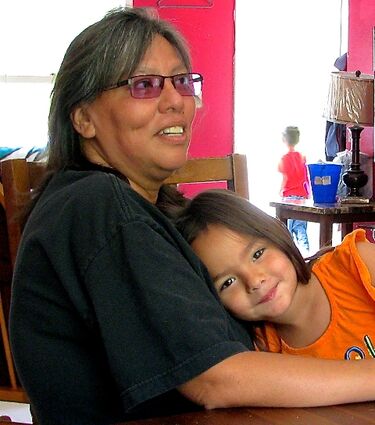 An interview with Volunteer Jay Rosebear with one of her twin granddaughters who refused to say which one she was.

"I tell those who ask, keep all the memories but there is no need to continue to mourn," Skywater counseled. "All we can do is pray for those who have suffered, but that it's okay to stop mourning. It's the way I understand it - right way or wrong way - is to release the Spirit of those passed. To help those who are still grieving."

Jay (Geraldine) Rosebear, of Ponemah is one who grieves. She lost a child in the tragedy and more recently is in mourning for a grandchild. Her mother encouraged her to be one of the many to volunteer as part of the Memorial Ride support team. Jay signed on as a cook and her son Tim Sumner says she is a good one. "She makes the best fry bread around," he says, "ask anyone."

“When I was on the ride I just felt good," said Rosebear. “I finally went into accepting. The healing process started right away. This is a new experience for us.” And Rosebear had another "new experience" on the trail. Jay and her long-time companion Petie Thomas, got married in a traditional ceremony during the journey with Skywater officiating.

Hello I am Gary Silk daughter I was wondering if you can make a change in your paragraph about my father..he married a red lake member...I just wanna correct that my father in I are standing rock members (hunkpapa)...n I have been on every ride with my father unity, Bigfoot, treaty, an the buffalo walk..since the year I was born..thank you..pila. .