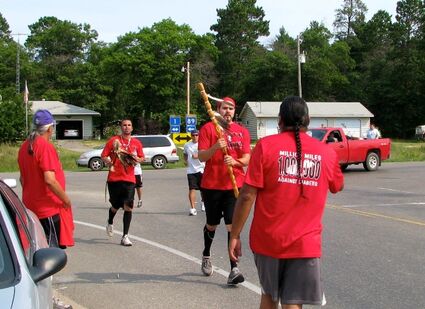 The annual four day Anishinaabe Run for Sobriety and Health began at the Red Lake Chemical Health Programs at 10:00 a.m. Wednesday, August 1, and finished at the Mash-ka-wisen pow-wow grounds at Fon du Lac on Saturday, August 4, a 200 mile relay run.

On the first day, more than a dozen runners, including several youth began their run down Highway 89. It was a warm August Day with the temperature approaching the low 80’s. The runners were accompanied by a near equal number of support staff, who would use five or six vans and cars to shuttle runners, provide water, and any other service the runners might need. Each team or individual runner would run 3/10 of a mile, then be shuttled ahead of the four or five other teams, allowing time to rest while awaiting their turn to run again.

The run slowed traffic a bit, as cars and trucks moved slowly into the left lane in order to pass the entourage of Red Lake runners and support vehicles commanding the right lane, but no one was delayed more than a minute or two. Drivers may have been wondering what the hold up was, but upon seeing the Eagle staff, many honked horns in support - which in response - the Eagle Staff was held high by the runners.

Reaching Roosevelt Road, the runners then headed east to the Leech Lake pow wow grounds on the Old Cass Lake Highway aka Roosevelt Road where they camped for the night leaving this writer behind. 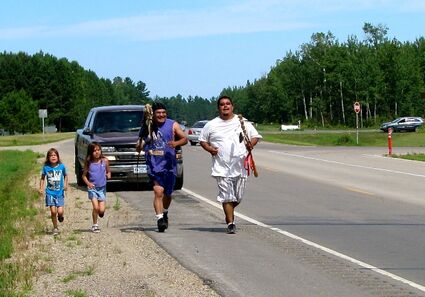 Donovan May and Daughters along with Mark Kingbird, Jr.

A shuttle back to Floodwood on Day 4 began the last leg of the run to Fond du Lac and the arrival at the Mash-ka-wisen pow wow grounds around Grand Entry for the start of the 34th Annual Celebration of Sobriety. Meals were provided along the way.

All runners were welcome no matter what nation, to participate in any and all of the run. Several joined up for short sprints, but many did the entire run, while others cheered them on or honked their horns with encouragement.

The run was sponsored by the Red Lake Chemical Health Programs and Traditional Foods Program: "Old Ways for Today's Health."