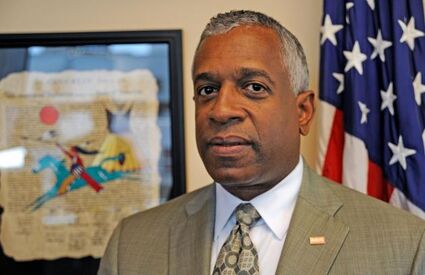 B. Todd Jones, the U.S. attorney in Minnesota.

Murderers, rapists, child abusers and other violent criminals on many of the nation's Indian reservations will soon be facing a more powerful courtroom opponent -- the federal government. Offenders on the White Earth Reservation in northern Minnesota are poised to be first in line.

As a result of the 2010 Tribal Law & Order Act, plans are now taking shape for some tribes to seek federal help in prosecuting crimes in Indian Country, where crime rates are more than double the national average -- and up to 20 times the national average on some reservations.

Federal jurisdiction will bring longer prison sentences for the worst offenders and additional legal firepower to bear on reservations that seek out the government's help, said B. Todd Jones, the U.S. attorney in Minnesota.

Many tribal groups, including the White Earth Band of Ojibwe, have complained in the past that county prosecutors didn't take crimes against Indians seriously enough, or that they treated Indian offenders differently. Women's advocates testified that reservation mothers tell their daughters to expect to be raped, and to keep quiet about it because they fear that nothing will be done.

The new law, signed two years ago by President Obama, undoes a provision of a 1953 law that shifted the prosecution of major crimes from the federal government to six states, including Minnesota, where most of the nation's 535 recognized tribes reside.

The White Earth Band jumped at the chance for federal help and has been meeting for the past year at least monthly with county, state and federal law enforcement officials to figure out how to implement it.

"We can't fix the past. In order for us to succeed and be a stronger community, so to speak, we've got to work together," said Randy Goodwin, director of public safety and chief of police on the White Earth Reservation. "We want to create a very good road map for other agencies and tribal nations to follow."

The new law allows tribal governments to apply to the U.S. attorney general, who must decide if federal prosecutions would increase public safety. If approved, an offender could be prosecuted by tribal criminal courts, if they exist, or by state or federal courts.

White Earth was the first to apply and has since been joined by a couple of smaller California tribes. A formal decision on White Earth's application has been pending since July with Deputy U.S. Attorney General James Cole in Washington, D.C.

Jones said his office hopes to begin prosecuting crimes on the White Earth Reservation next year. He has asked for money to hire prosecutors and victim advocates to handle the expected cases, despite a hiring freeze.

Aanstad and Clifford Wardlaw, an experienced prosecutor who helped Iraq set up a court system, head a team of five prosecutors who work as an Indian Country subgroup in the U.S. attorney's office in Minnesota. Aanstad said others can be tapped as necessary.

The biggest obstacle for federal prosecutors, she said, is the "time-distance problem." The four- to five-hour drive is also a problem for tribal members, too, who must commute to trials in Minneapolis or St. Paul, where all of the district's judges work.

Drugs are root of crimes

No one knows how many cases the feds might take from White Earth. Aanstad and Goodwin agree that no one has good numbers.

Drugs lie beneath many crimes on the reservation, Goodwin said.

"We still do have a huge prescription pill problem. We have heroin coming back strong on the White Earth Nation, and all of the crimes associated with that, and the overdosing and people dying," he said. "Amphetamines are coming back. Violent crimes. Domestic violence crimes."

County, tribal and federal officials say they are working well together and have no complaints about the handling of criminal cases. But it hasn't always been that way.

In the past, Goodwin said, there was "a lot of unfairness" in prosecutions. The situation got so bad, he said, that the tribal council considered withdrawing from state prosecutions altogether. When the Tribal Law & Order Act came along, making concurrent state and federal jurisdiction a possibility, the band decided to give it a try, Goodwin said.

Joe Plumer, a member of the Leech Lake Band of Ojibwe, is a White Earth tribal attorney and chief judge for the Meskwaki Tribal Court in Tema, Iowa. While he agreed that relations between White Earth tribal officials and county prosecutors are good at the moment, he said that "in the recent past we saw how bad it could be, and we know how easily it could slip back."

'Can't be subject to whims'

White Earth established its tribal court and police force in 1997 after a series of state and federal supreme court rulings limited the scope of Public Law 280, the act that established state jurisdiction 59 years ago. Under Minnesota law, tribal police could be licensed by the Minnesota Board of Peace Officer Standards and Training like other law enforcement officers, but only if they maintained agreements with the counties. The agreements were signed and things went well until about 10 years ago, Plumer said.

"It looked like local reservations were starting to develop expertise and stand up for themselves. And the counties, local county actors, didn't like it, you know, like the tribes were getting uppity," he said.

Plumer said Mahnomen and Clearwater County tore up the policing agreements. He said the White Earth Band reached out to then-U.S. Attorney Tom Heffelfinger, who brought the parties together to resolve the dispute.

Mahnomen County also had a disagreement with the band over its taxing authority on the Shooting Star Casino, one of two Indian-owned casinos. Mahnomen demanded that White Earth pay property taxes. The band sued in U.S. District Court in Minneapolis and eventually won the case.

That history is why concurrent jurisdiction is still needed, Plumer said. "We can't be subject to the whims of these type of people."

Mahnomen County Attorney Darlene Rivera minimized any past disputes and said things are going well as the various parties determine which kinds of cases each agency will take. "It's very exciting stuff going on," she said.