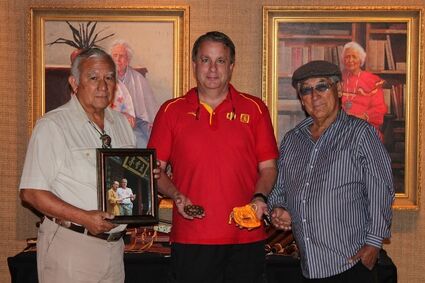 For Chickasaws Jack and Wendell Pettigrew, making flutes was as natural a part of growing up as making their own fishing poles.

"When you’d go fishing, you didn’t go out and buy a fancy fishing pole. You got a cane pole and put a line on it and that’s how you fished," said Jack. "You would make flutes out of cane or whatever you could find. They would even use stalks of Castor beans."

At the time, they would have never imagined that one of their flutes would be presented to a Shaolin Monastery in China.

For David Butler, one of those flutes served as a ticket into a Shaolin Monastery in China.

Mr. Butler was planning to visit relatives in China, and hoped to meet with the Abbott or one of the monks at the monastery near Zhengzhou, China during his trip.

While the temple is well known for the Kung Fu martial arts style practiced by the monks there, Mr. Butler said it is even better known for Chen Buddhism.

"There are Kung Fu tourists who go there," said Butler. "But to a lot of people this Abbott is like the Pope, because this temple is the birthplace of that style of Buddhism."

Butler said that as a student of Kung Fu, he recognized similarities between Chen Buddhism practiced by Shaolin monks and the Native American culture he is familiar with through friends such as Jack and Wendell Pettigrew.

As it happens, his idea of presenting a Chickasaw flute as a gift opened the door to the monastery.

"It was just kind of a spur of the moment thought before I left - maybe I should take them a gift kind of thing," said Mr. Butler. "It turns out if I hadn’t come up with that idea, if I hadn’t thought about it, I never would have even been able to talk to the Shaolin."

Knowing he wanted a very special flute for the presentation, he went to his friends Jack and Wendell Pettigrew.

"I was blown away by the flutes he showed me," said Mr. Butler. "But there was no way I could afford anything like that. So I purchased a small one."

Thinking he would have to make do with the smaller flute, Mr. Butler was about to drive away when Jack Pettigrew stopped him to offer a larger flute as a gift.

"I felt that giving (the Abbott) a traditional flute would be more appropriate," said Jack. "So we thought it would be nice to just present him with a flute with a Chickasaw design."

Design elements included a wolf, paw prints, the southeastern symbol representing water, bead work made of porcupine quills and an eagle. Wendell said that some of the design elements came from the mounds in the Chickasaw homelands.

"This flute that he gave me was museum quality," said Mr. Butler. "It just blew me away. It was absolutely beautiful."

While Butler was pleased he had a fine gift to present to the temple, there was some doubt he would ever get to make the presentation. When he first made the request to present a gift to the temple, his tour guide was very skeptical about his chances of meeting with one of the monks.

"She called back after she got the message and said that she didn’t think that would be possible," said Mr. Butler. "She had been doing the tours for 12 years and she had never talked to the Shaolin directly.

"She said ‘they are really busy and don’t concern themselves with tourists. The students are the ones who do the Kung-Fu display. You probably won’t even see a real Shaolin.’"

While Butler was disappointed, he persisted.

"Then I told her it was a Native American gift from the Chickasaw Nation and I had made a promise to put it into the hands of a Shaolin monk and I wanted to make sure it got to the temple," he said. "I want to present it to the temple. It doesn’t have to be the Abbott, but I would like it to be the Abbott.

"She said ‘I have a number for the Abbott’s secretary, I can call and see what happens.’"

Within an hour, the tour guide called back to say that the Abbott was very excited about the gift. While the Abbott was out of the country, he asked if Mr. Butler could delay his departure so the Abbott could receive the gift personally.

When Butler told her that was not possible, the Abbott appointed one of the monks to receive the gift. That monk brought a gift of prayer beads for Mr. Butler in exchange.

"I had a letter I had written out about the flute," said Mr. Butler. "My wife had translated it into Chinese. I printed it in both English and Chinese and gave it to them. The interpreter was telling them a little about the flute.

When they went outside the temple to exchange gifts, Mr. Butler received an impromptu Kung Fu demonstration of sorts. 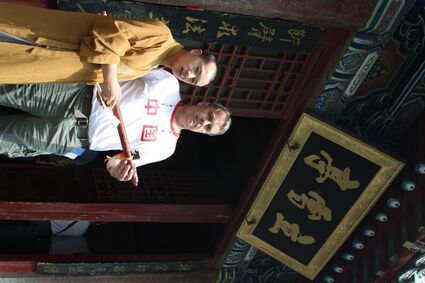 David butler presents the Chickasaw flute to a monk at the Shaolin temple near Zhengzhou, China.

"The monk was going to put the beads in my hands and a tourist kind of pushed in between us and was going to try to snatch the beads, because he thought it was one of the vendors dressed like a monk," said Mr. Butler. "I learned one thing – never try to snatch anything from a Shaolin monk.

"There was this blur - he spun the guy around and headed him down the stairs and the bracelet was on my hand before I knew what happened," he said with a chuckle.

When Mr. Butler returned, he presented the prayer beads to Jack and Wendell Pettigrew, who said that it gave them a sense of satisfaction to know that their work is in a place of prominence in the temple in China.