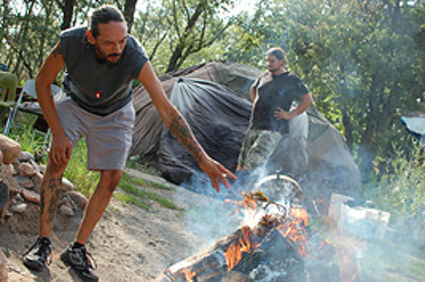 Ojibwe tribal member Fred Isham throws sage on a fire that's heating stones used in the sweat lodge behind him. Sage is a sacred, purifying medicine for the Ojibwe. Isham, a participant in the Cass County - Leech Lake Tribal Wellness Court, uses the sweat lodge and other cultural ceremonies to help him stay sober. The wellness court program is the first of its kind in the country. (MPR Photo/Tom Robertson)

Cass Lake, Minn. — Fred Isham sits near a blazing fire just outside Cass Lake on the Leech Lake Indian Reservation. The 37-year-old tribal member helped build the fire to heat carefully selected stones that will be used in a nearby sweat lodge.

Inside the sweat lodge, Isham and others will pray and conduct spiritual Ojibwe ceremonies.

Isham participates in the Cass County - Leech Lake tribal "wellness court." He's encouraged to use ceremonies and other cultural activities as part of his recovery from alcohol and drug addiction. It's not required, but evidence suggests cultural and spiritual connections can help the healing process.

"The sweat lodge to me... in a sense what you're doing is you're going back into the womb of the mother. When you come back out there it's a rebirth. You're clean again," said Isham, who is a member of the Boise Forte Band of Ojibwe but grew up here.

Isham was a chronic drinker and pot smoker. Last summer he got his second DWI citation, and he later violated probation. But in December, he took the opportunity offered to participate in wellness court, an alternative to a year in prison.

The court is a unique partnership among the Leech Lake Band of Ojibwe and Cass and Itasca counties in northern Minnesota. It uses intense supervision and, in some cases, tribal culture, to target chronic substance abusers and cut the cost of crime, and it is among a variety of new strategies and approaches to public safety the local officials are trying.

Wellness court is similar to the DWI and drug courts that have become popular across the country. It's a voluntary prison diversion program that provides structured supervision and rehabilitation for non-violent, repeat drug and alcohol offenders. The average length of the program is 18 months for gross misdemeanor offenders and 24 months for felony offenders.

For participants, it's strict. Isham must attend weekly Alcoholics Anonymous meetings. He anwers to a probation officer and must attend wellness court meetings every other week. The court sessions are convened jointly by both tribal and county judges, who get updates on his progress.

The judges praise Isham for his successes and sanction him if he messes up. He's not allowed to leave Cass County without the court's permission.

One of the most stringent parts of the program is drug and alcohol testing. Program staff can require him to take a urinalysis test at any time, even in the middle of the night.

Initially, that part of the program kept him on track. Later, his own success drove him, he said.

"They're really on you all the time," he said. "I've got to do breathalyzers anywhere from two to three times a week. They do have faith and they do believe in a person that you can get to where you want to be, you can be sober, you can live a good life."

Some Leech Lake tribal leaders were suspicious when asked to help create the wellness court back in 2006. The tribe is sometimes at odds with the state, and band leaders are protective of their sovereignty.

But the tribe came to realize that participating in the program gave tribal judges the chance -- for the first time ever -- to sit in a courtroom with county judges as equals. It gave the tribe a direct say in the outcome of cases involving band members.

The Leech Lake tribe has a lot at stake. By some estimates, as many as 60 percent of the reservation's tribal residents struggle with drug and alcohol addictions. It's a problem that touches nearly every family.

In Cass County, Ojibwe people make up about 12 percent of the population, but they typically account for close to half of the county jail population. They're over-represented in the state corrections system, too, and they're more likely to reoffend and get sent back to prison.

Korey Wahwassuck is an associate judge for the Leech Lake Band. In wellness court, she shares the bench with her counterparts from Itasca and Cass counties. Wahwassuck says the program is a way to heal people rather than lock them up.

"Nothing else has worked," Wahwassuck said. "We've had people that go back through the revolving door and have repeat offenses, and nothing ever really breaks that cycle of addiction.

Wellness court encourages family members and others to come to court and get directly involved in the process. The wellness team has helped participants find jobs and housing. It's even helped reunite families. Wahwassuck says that broad approach is the only way to slow down the revolving prison door.

"We hear from so many of our participants that maybe a spouse or a significant other got sober with them. Then that affects their children and really has a way to start breaking that cycle of addiction in people's lives," she said.

Because of limited resources, wellness court is capped at 25 participants at a time. In the past six years, 61 people have gone through the program in Cass County. About half have successfully graduated. And among the graduates, only two have reoffended.

"I think they're phenomenal, almost miraculous," Smith said. "The recidivism rate is under 10 percent, which, for chronic alcohol offenders, is absolutely miraculous to me. I think it's probably the best thing I've done as a judge, and most rewarding, in the sense that, we really get the feeling that we're helping people."

The court doesn't deal only with tribal members. About half of its participants are non-Indian.

Thirty-one-year-old Mike Rowell of rural Pine River wears a cross around his neck and a t-shirt that says "Celebrate Recovery." He's been involved in wellness court since 2010, when he got his fourth DWI. He's been in and out of treatment 12 times. Rowell says it was either spend the next three years behind bars, or get sober for good.

"The way I put it, there's a noose around your neck and you're standing on a bucket, and if you don't conform, they're going to kick the bucket out from under you," Rowell said. "That's how it is when you start the program. That's how you feel. That's not how it is. They actually care."

Rowell is set to graduate from the court in November. It has given him the tools he needs to lead a better life, he said. He goes to AA up to four times a week, attends church functions and speaks once a month at his treatment group. Rowell says his life now revolves around sobriety.

"I am into this," Rowell said. "This is my life. Because I tell you what, my life before and my life now, you wouldn't see a smile on my face before. I was a pretty rugged dude, I was. And I've embraced the program. I live it, I walk it, I breathe it."

A statewide evaluation of the effectiveness of alternative justice programs like wellness court is currently underway. The study is expected to be completed next year.