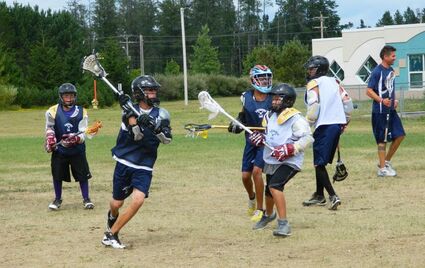 SAINT PAUL, Minn. - The third annual Lax-4-Life Camp, a five-day, four-night lacrosse camp for Native American boys and girls concluded this past week on the Fond du Lac Reservation in Northern Minnesota. This year's camp continued to grow for the third straight year and a record eight tribal communities were represented at the camp.

Founded in 2010, Lax-4-Life's mission is to preserve the heritage of the Native's ancestral game and help restore the tradition of lacrosse to tribal communities. The camp offers a healthy alternative to problems that currently affect Native Communities such as gangs, drugs, suicide, violence, and diabetes.

“This program is based around the kids and we're at the point where we're bringing kids back as counselors and bringing these kids out to colleges and bettering their lives,” said Caines, who finished his third year as the lead instructor of the camp. “It's 100-percent the kids that keeps me coming back.”

Aaron Buckanaga, who returned to the camp as a youth counselor, was among a handful of kids who were given the opportunity to take a tour at the University of Minnesota-Duluth to learn more about the college application process.

“I came back for the love of the camp and to advance myself and help other kids advance,” he said.

All week long, campers spent time learning about the history of the sport and its origins to the Native American Community. Campers were even treated to a special screening of Crooked Arrows, the first mainstream lacrosse film, which centers on an all Native American team.

“It was extremely interesting and it's information you should know about the sport you love,” said Suitor, who made the trip to Fond du Lac from his hometown of Peterborough, Ontario.

“The National Guard has a duel mission: We have a mission to our country, but we also have a mission to the state of Minnesota and our communities,” said Sgt. First Class Richard Kargel of the Minnesota Army National Guard. “We have armories set up in many communities throughout Minnesota and we like to be involved by doing community work and services. This is a great opportunity; the Cloquet Armory is right next to the Fond du Lac Reservation. It gives us an opportunity to work with the Native Americans and show our support for the community and the tribe.”

Campers traveled as far away as Nevada to attend this year's camp, which culminated with its annual Game for The Creator on the last day, where campers participated in a scrimmage to showcase their lacrosse skills.

“This camp continues to get better and better,” Lax-4-Life co-founder and Minneapolis Police Officer Clint Letch said. “The energy it has gained over the last three years is unbelievable.”

Since it was founded two years ago, Lax-4-Life has received national recognition from the Obama Administration for its efforts in promoting healthy lifestyle choices for Native American youth. Earlier this year, Lax-4-Life co-founder Bryan “Bear” Bosto was recognized at the White House as a Champion of Change for his work in bringing lacrosse back to his community, the Fond du Lac Band of Lake Superior Chippewa.

“To watch these kids grow up and mature over the last three years is something that I take a lot of pride in,” Bosto said.

One of the goals of Lax-4-Life from Day 1 has been to build leaders in the community, and Bosto added that it was extremely rewarding to see several campers return to camp this year as youth counselors and express interest in touring a college.

“For our community, it means that we're doing the right thing,” Bosto said. “We're giving our kids the resources and pointing them in the right direction on what they should be doing.”