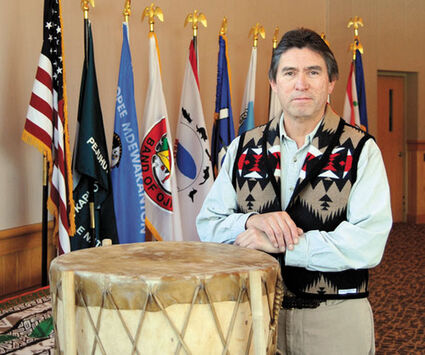 Donald Day will take over Aug. 13 as president at Leech Lake Tribal College.

CASS LAKE – Leech Lake Tribal College has selected the director of the American Indian Resource Center at Bemidji State University as its next president.

Day will succeed Ginny Carney, who is retiring after more than a decade at the college, a news release from the LLTC’s board of trustees announced Thursday.

“On behalf of the LLTC Board of Trustees, I extend a warm welcome to Dr. Day,” Rose Robinson, board chair for the Leech Lake Tribal College, said in the release. “We are all looking forward to working with Don as he steps into this leadership role at an entity that is so important to our community.”

Previously, he served as president of Fond du Lac Tribal and Community College, where he led an initiative to gain approval from the Higher Learning Commission for the college to offer its first ever four-year degree program.

“Leech Lake Tribal College is an awesome institution with strong academic programs that are grounded in Anishinaabe values,” Day said in the release.

“I look forward to working for my people again and expanding the already impressive services and outreach efforts in which the college faculty and staff are now engaged.”

Carney plans to remain on the LLTC board until Aug. 15 before returning to Tennessee to spend time with family and friends.

“My 11 years at Leech Lake Tribal College have been some of the most rewarding and fulfilling years of my life, and I am confident that Dr. Day will be given the same warmth and respect that I have received,” Carney said. “I offer my congratulations to Don and wish him all the best as he assumes his role as president of LLTC.”