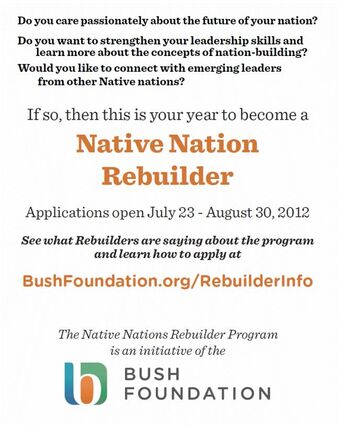 (St. Paul, MN – July 17, 2012) Tribal citizens who are passionate about the future of their nation, who want to strengthen their leadership skills while learning about the concepts of nation-building and who wish to connect with emerging leaders from other Native nations are encouraged to apply to the Native Nation Rebuilders Program of the Bush Foundation. Applications are open from July 23 to August 30, 2012.

The Foundation launched the Rebuilders program in 2010 in support of the elected leaders of the 23 Native nations the Foundation serves (see list below), who said that partnering with other emerging and existing Native leaders will be crucial to the success of their nations over the long term. Rebuilders make a significant commitment. They agree to participate consistently in ongoing activities throughout the program’s two-year period, to actively share knowledge with peers and with their respective nations’ governments, and to develop and implement nation-rebuilding action plans.

The Rebuilders Program seeks candidates who are at least 25 years of age, an enrolled citizen of one of the 23 nations who is living on or near his or her nation’s lands (or in urban communities) and is significantly engaged in his or her nation’s work.

The four Rebuilder trainings in the first year of the two-year program are led by several regional and national partners with expertise in nation-rebuilding, organizing and issues specific to Indian Country, including the Native Nations Institute and the Harvard Project on American Indian Economic Development.

Rebuilders chosen during the 2012 application period will be the fourth cohort since 2010. The names, tribal affiliations and bios of Rebuilders from Cohorts 1 through 3 are available at BushFoundation.org/Rebuilders.

Jaime A. Pinkham (Nez Perce) is vice president at the Bush Foundation and leads its efforts to partner with tribal nations, including the Rebuilders program. He said, “Rebuilders have become important allies in the nation-rebuilding efforts of their tribes. We continue to be inspired by the passion Rebuilders have for their lands and people, and by the deep connections they are making across nations with one another.”

A Rebuilder from the third cohort said, “I feel this is one of the best opportunities to explore nation-building efforts. Sharing and learning with others will help identify problems and solutions for all. This may be the only place that discussions like this will take place.”

Application information is available at BushFoundation.org/ApplyRebuilders.

The 23 Native nations the Foundation serves are:

About the Bush Foundation

Our mission is to be a catalyst for the courageous leadership necessary to create sustainable solutions to tough public problems and ensure community vitality. The Foundation was established in 1953 by 3M executive Archibald Bush and his wife, Edyth, and today works in communities across Minnesota, North Dakota, South Dakota and the 23 Native nations that share the same geographic area. Learn more at BushFoundation.org.