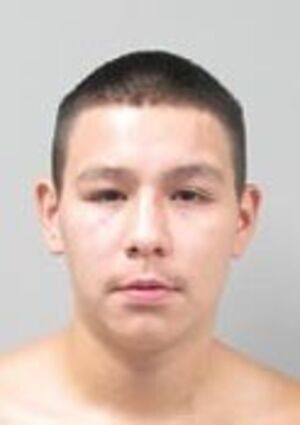 BEMIDJI – Brandon Joseph Roy, 19, of Bemidji, has been charged with a felony and gross misdemeanor following his early-morning arrest Tuesday in Skyline Village.

According to the criminal complaint, Roy was arrested after officers responded at 12:45 a.m. to a report of a male who was threatening others while also concealing a knife. Witnesses reported that Roy had approached them and threatened to kill or harm all of them with a knife.

The four witnesses said they ran into a mobile home while Roy paced outside of the residence repeating his threats, according to the complaint.

Once law enforcement arrived, Roy fled from officers on foot, the complaint alleges. He was found hiding in a bush within the trailer park.

If convicted of the felony, Roy faces a maximum penalty of five years in prison and a $10,000 fine.

If convicted of the gross misdemeanor, he faces a maximum penalty of 90 days in jail and a $1,000 fine.

Roy remains in Beltrami County Jail. He is being held without bail on the alleged probation violations.