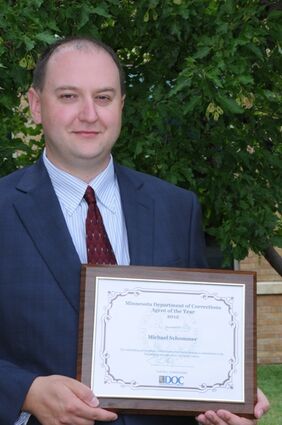 Fergus Falls, MN – A state worker who spends his days helping people who have broken the law to turn their lives around is being honored for his hard work. Today, the Minnesota Department of Corrections (DOC) recognized Mike Schommer’s efforts with the Corrections Agent of the Year Award.

Schommer is an Intensive Supervised Release agent for the DOC, working with high-risk offenders recently released from prison. He is part of a team of agents who cover a 13-county area in western Minnesota that includes Moorhead, Fergus Falls, Alexandria, Morris and Detroit Lakes. Schommer also trains other agents to improve their safety and communication skills.

“Michael works tirelessly with the offenders he supervises to hold them accountable, help them change and make our communities safer,” said Corrections Commissioner Tom Roy. “And his work with our safety training program is vital to our staff. Home visits are an important part of community supervision; but they are also the most dangerous part of the job.”

Schommer is also active in the community. He has been a sandbagging volunteer during the Fargo-Moorhead floods and organized a group of offenders to help as well. Schommer also partnered with local law enforcement to present the NetSmartz program at area schools to teach children to be safe while communicating online.

"It is truly an honor to be recognized by my peers for doing a job that I love,” Schommer said. “This is an exciting time to be working in corrections because we are using research to increase public safety. We are being proactive in our work with clients to reduce recidivism by changing the way offenders think." 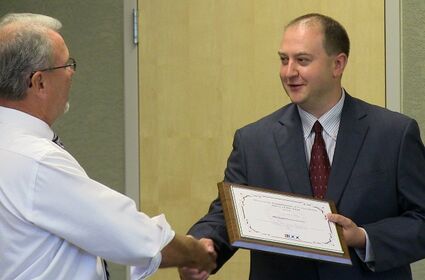 Schommer has been a DOC agent since 2005. Under Minnesota law, there is no time off a prisoner’s sentence for good behavior. Offenders sentenced to prison serve two-thirds of their time in prison and the last one-third in the community under the supervision of agents like Schommer.

The Corrections Agent of the Year Award is presented annually in conjunction with Probation, Parole and Community Supervision Week, this year July 15-21. The winner is nominated by his/her peers as someone who consistently portrays a professional demeanor that brings credit to the position of agent and to the corrections profession as a whole and who demonstrates commitment to the DOC vision and values.