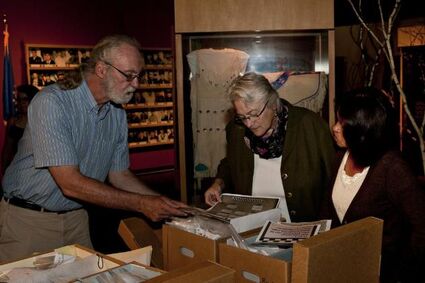 Bill Latady, curator at Bois Forte Heritage Museum, sorted through some of the items with Pat Gaarder of the Minnesota Historical Society, center, and Rose Berens, the museum’s executive director. The boxes were delivered on Sunday.

Ron Geshick was 6 years old when a university archeologist showed up on the shores of Nett Lake in northern Minnesota and began digging for American Indian artifacts.

Sixty-four years later, Geshick fought tears as more than 8,000 items unearthed in that dig were returned to the Bois Forte Band of Chippewa by the Minnesota Historical Society.

"It's like having a long-lost relative come home," Geshick, now a 70-year-old tribal elder, said after a spiritual guide led tribal leaders in celebrating the return of the items amid songs, prayers and a pipe ceremony this week. "Very powerful feelings come from these."

The artifacts, some of which are believed to be nearly 3,000 years old, were returned as part of an ongoing effort by the Bois Forte Band and other American Indian communities to reclaim items taken from their lands.

Bill Latady, curator of the Bois Forte Heritage Museum near Tower, Minn., said part of the collection, which includes ceramic pot shards, knives, stone tools, arrowheads and spear points, will eventually be publicly displayed to promote the history of the Bois Forte Band.

The Bois Forte Indian Reservation is in Koochiching and St. Louis counties, about 100 miles north of Hibbing. The band is one of seven in the Minnesota Chippewa Tribe. There are more than 3,000 Bois Forte band members, with about 1,000 living in the Nett Lake area.

"Even though we have teachers in our school teaching the Indian culture, it's not the same as experiencing all this," Geshick said. "Having the real thing from the past being here with us, maybe that'll bring the interest back."

Most of the Nett Lake collection consists of tiny pottery shards, an indication that the dig site was a popular place for harvesting wild rice, said Pat Emerson, head of archeology at the Minnesota Historical Society.

The artifacts were unearthed during a two-week excavation of the lake shoreline and a nearby terrace by University of Minnesota archeologist Lloyd Wilford in July 1948.

Emerson said historians have found no evidence that Wilford was given permission by the local band or the Bureau of Indian Affairs to be there.

At the same time, Geshick said, it was unlikely that the band challenged him.

He said tribal traditions were frowned upon at that time by non-band members, and many customs simply weren't permitted.

"Any time somebody would come, our band members just went along with what they asked for," Geshick said. "That's just the way our people were. We were very submissive.

"We weren't allowed to speak our language or do our customs. Band members were intimidated. While they may have held opinions, people didn't speak up. I'm sure a lot of people were against it -- taking the artifacts -- but they didn't want to say anything because of fear."

Emerson said Wilford, who retired in 1959 and died in 1974, brought the items back to the University of Minnesota, where he catalogued them and filed them away.

They remained in storage and went largely untouched until 1999, when the university gave its archeological collections to the Historical Society, Emerson said.

The band's effort to reclaim the artifacts began four or five years ago after a Bureau of Indian Affairs archeologist told Latady of their existence.

Soon after, Latady contacted Emerson to see whether the collection could be returned. The tribal council followed up last year with a formal, written request.

"Everyone realized immediately that if this collection is from tribal land, and the band gave no permission for someone to collect this, we had no legal right to keep this," Emerson said.

Over the past year, Historical Society interns photographed and identified each artifact. They later wrapped each item and placed them in a box.

All were delivered to the heritage museum on Sunday.

Latady said the collection will remain in storage until he can inspect and review it.

Tribal elders also will determine "what is appropriate to be exhibited," Geshick said.

Eventually, some items will be put on display at the museum. Others will be kept in storage but will be made available to band members or others in the public who wish to view or study them.

Three birch bark rolls and six other sacred artifacts were returned in 2005 by the American Museum of Natural History in New York.

A year later, 42 centuries-old birch bark scrolls were returned by a Kentucky physician. The scrolls are inscribed with symbols and pictures depicting ceremonial songs.

"We can be bringing back a lot of our past," Geshick said.

"It's almost like bringing it back to life. To me, that's pretty special."